This article is using {{Card template}}.
See Help:Style guide/Card for how to edit this kind of article.
Edit this article
Emperor Thaurissan
2320 • BRMA03_1
Regular 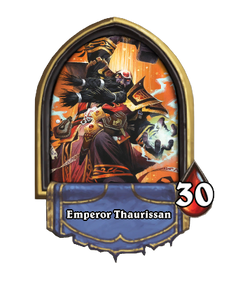 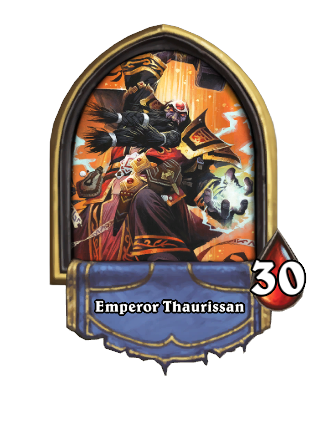 Emperor Thaurissan is a boss encounter found in the Blackrock Mountain adventure. It is the third encounter of the adventure's first wing, Blackrock Depths. 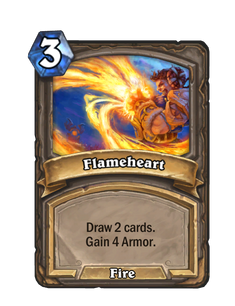 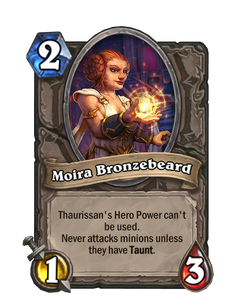 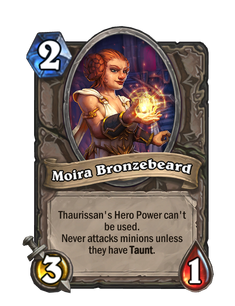 Emperor Thaurissan starts with Moira Bronzebeard (Heroic) on his side of the board.

The key mechanic to the Emperor Thaurissan fight is his hero power,

Power of the Firelord, which will most likely spell instant death for you if the Emperor is allowed to use it. Only one thing stands between you and instant, fiery death - the Emperor's wife, Moira Bronzebeard (Heroic) . As long as she survives, the Emperor cannot use his hero power, giving you a chance to defeat him.

Obviously, it is vital for the player to ensure that Moira survives, at least until very near the end of the battle. Luckily, Moira will not attack your minions unless they have Taunt; the rest of the time she will simply go face. However, her presence generally prevents the use of AoE damage/destroy effects, and unfortunately the Emperor has a few of these himself, such as

Death's Bite. These effects can easily lead to Moira's death without any help from the player, especially on Heroic mode.

The player can use healing and buffs to keep Moira alive. The priest's

Lesser Heal is effective for this on Normal mode, but on Heroic Moira's single point of Health means buffs such as

Power Word: Shield will be required to make healing viable. Classes with Health buffs can use these to improve her chances of survival, but beware increasing her Attack since she will continue to hit you each turn.

Crazed Alchemist is a good card to use, since it increases her Health enough to survive Thaurissan's AoE, and at the same time decreases her Attack. With it, Moira is essentially turned into her Normal version.

Taunt minions are obviously a bad idea for the most part, as Moira will rapidly destroy herself through attacking them, although 0 Attack Taunts like

Shieldbearer can be used without much risk. This also makes

Defender of Argus a dangerous choice.

Mechanical Yeti is not advised because if Thaurissan obtains

Time Rewinder from the Yeti's Deathrattle, he will return Moira to his hand and use

Power of the Firelord.

Paladins have several useful cards for use on Moira:

Blessing of Wisdom, providing the paladin with constant card draw (she will attack each turn regardless of the buff);

Humility to reduce her damage output;

Blessing of Kings to increase her Health (best followed by Aldor Peacekeeper or Humility in order to ensure she doesn't destroy you outright); and

Hand of Protection, which is perfect for shielding her from a single burst of AoE damage.

Power of the Firelord. Play

Lorewalker Cho and use

Shadowform, Thaurissan will then use his own copy of Shadowform and now killing Moira will not result in immediate defeat. That way player can stop caring about Moira and play the match like any other.

Another, rather cheap and effective, way to defeat Emperor is to run a priest Murloc deck, with spells that will save Moira.

Slaying Moira does have one small consequence besides enabling the Emperor's hero power - it changes the dialogue presented by Nefarius after the battle (see below).

With the The Grand Tournament, this battle can be made easier with the use of

Power Word: Glory. A player can use this spell on Moira and she will continuously heal your hero while attacking, this allows the player to focus on trades rather than spending the mana trying to heal.

Convert can give you a copy of Moira to replace her if something goes wrong but Thaurissan can attack the copy.

Another, albeit strange strategy, as of the release of Mean Streets of Gadgetzan, is to use

Mayor Noggenfogger. This means that once you kill Moira there is the chance that Thaurissan will kill himself or that he will simply destroy a minion. This is of course not a foolproof strategy as Noggenfogger may redirect to your face once Moira dies. 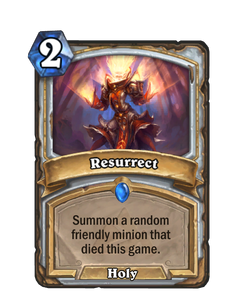 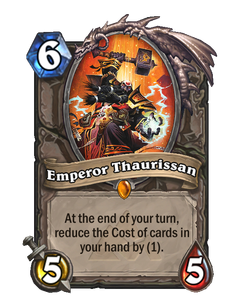 Emperor Thaurissan
Shut your mouth, or I'll shut it for you!

Emperor Thaurissan
By the power of Ragnaros! I have the power!

Emperor Thaurissan
No! Moira! You will PAY!

Emperor Thaurissan
No! Ragnaros! Not again!

Emperor Thaurissan
Aaaaaaaaaah!
Nefarian
You should have slain that other dwarf! Leave none alive! (if Moira is alive)
You managed to kill both dwarves? Impressive, adventurer. (if Moira is dead)

The sooty stone halls of Blackrock Depths form a dim, sprawling city whose subterranean streets are filled with Dark Iron dwarves. The Dark Irons are enslaved to the will of Ragnaros the Firelord, and that’s a pretty time-consuming job. When they’re not slaving away, however, they make time for fun! Brawls in the Grim Guzzler, brawls in the Ring of Law . . . really just brawling everywhere they feel like brawling.

Emperor Thaurissan rules in title alone. He, like the other Dark Iron Dwarves, serves at the whim of the Firelord. That’s unfortunate because the benefits are just awful—no vacation time whatsoever. Thaurissan’s glad you’re stopping by for a visit; fighting you will let him take his mind off a lifetime of servitude. Should you dethrone the Emperor, he’ll bestow upon you two copies of the Priest spell Resurrect.

After proving your strength to the Dark Iron dwarves, Emperor Thaurissan will join your forces and add his Legendary card to your collection![1]

"Thank you for clearing out those foolish senators. Now prepare to meet your doom at the hands of Ragnaros' most powerful servant."

Emperor Dagran Thaurissan, a descendant of Emperor Thaurissan and Modgud, ruled the Dark Iron clan with a combination of charisma, sorcery and iron will. Even as the leader of his clan, he is, like all Dark Iron dwarves, a servant of Ragnaros. The Emperor rules his people not from the city founded by (and named for) his ancestor, but rather from the depths of Blackrock Mountain near the entrance to Ragnaros's domain, the Molten Core. The Emperor's Dark Irons swarm the depths of Blackrock Mountain, and have also been seen in the Searing Gorge to the north and the Burning Steppes to the south. He has also sent his emissaries and agents to the gnomish capital of Gnomeregan, apparently in an effort to back the self-proclaimed ruler of Gnomeregan, Sicco Thermaplugg.

The Emperor kidnapped King Magni Bronzebeard's daughter, Princess Moira Bronzebeard, and treated her with the respect due her position, and even kindness and affection. Moira soon fell in love with him, marrying him. She is now pregnant with his child, who is half Bronzebeard dwarf and half Dark Iron dwarf, and the heir to both thrones of Shadowforge and Ironforge.

It is revealed in The Shattering: Prelude to Cataclysm that King Magni Bronzebeard sent a team to kill Emperor Thaurissan, and retrieve the previously thought to be ensorcelled Moira back to Ironforge. Yet Moira refused to come home and announced that she was pregnant, and that the death of her husband has left a terrible, fiery rage within her heart.

Dagran currently wields the legendary hammer Ironfoe, but not by legitimate means. The hammer's hereditary owner, Reginald Windsor was captured and imprisoned by the Dark Irons, his weapon claimed by Dagran.

Emperor Dagran Thaurissan rules alongside Princess Moira of the rival Bronzebeard clan. Debate rages over whether the emperor ensorcelled his bride or she willingly joined him. Whatever the truth, Thaurissan's continued presence bodes ill for the future of his clan. So long as he lives, the Dark Irons will remain pawns of Ragnaros, and a dire threat to kingdoms throughout Azeroth.