Difference between revisions of "Emote"

Emotes are short quotes that heroes can speak during a game. Each emote comes as a soundbite, and in a written form, displayed in a speech bubble next to the character's portrait. Emotes are the only form of communication possible between players during a game, aside from the friends chat function. Players can perform voluntary emotes by right-clicking on their hero's portrait and selecting the desired option.

Players can choose to prevent all voluntary emotes from their opponent by right-clicking their portrait and selecting the 'Squelch' option.

There are 28 different emote triggers in total. Each hero has their own unique emotes in response to each of these events. 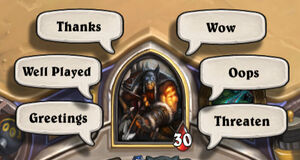 "Well played" is a general compliment to the opponent on their play, but is also used by players at the end of a match to mean "good game". Because of this, players may also use "well played" to say "goodbye". In addition, "well played" may refer to player skill, or simply to a lucky sequence of cards or events. Well played is also often used sarcastically, especially to suggest an easy win by the opponent, often because their deck is considered overpowered. With so many possible meanings, the emote leaves a lot of room for interpretation, often resulting in misunderstanding.

"Greetings" generates a (relatively) friendly greeting message. "Threaten" is sometimes used by players as a more dramatic or humorous form of greeting. "Greetings" is also sometimes used, often repeatedly, to express frustration with the time their opponent is taking to select their play. Such use can interfere with the player's play, and can be prevented using the Squelch feature. "Greetings" is also commonly used as a form of BM (deliberately obnoxious behaviour) when delivering a devastating blow to the opponent, or revealing a winning play. "Wow" is a new emote introduced with the Whispers of the Old Gods expansion, replacing the "Sorry" emote. The emote "Wow" is intended to be used when the opponent pulls off an amazing play or when RNG rocks up the game.

"Oops", when uttered before the game actually starts, is sometimes used to convey disapproval of your starting hand. More commonly, it is used to express a mistake or dissatisfaction with the results of a random event; or to point out an error that the opponent has made.

While not true emotes, upon being selected at the start of an Arena run, each hero will produce a special soundbite, also heard when clicking the hero in the Heroes tab of the Collection. A list of these can be found at Arena#Quotes.

Rather than the traditional emote system, players can choose six special emotes. These display the selected face on the opponent sidebar and is visible to all players. These are not voiced and are the same for each hero.

Emotes are unlocked for the current season by purchasing the Battlegrounds perks. 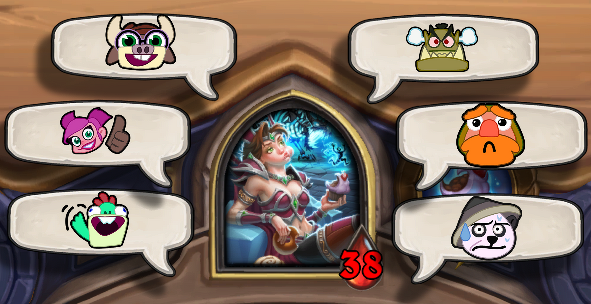 Squelch does not prevent players from activating emotes, but only prevents them from being displayed (visual and audio) for the other player. Squelched players do not receive any notification of being Squelched, and will still see and hear their own emotes, as well as those of their opponent (unless they have also been Squelched).

Emotes are the only direct communication possible for non-friends during a game. This relatively restrictive design has attracted significant discussion, with many players requesting the ability to communicate directly with their opponents. Blizzard currently has no plans to introduce text chat into Hearthstone.

The reasons behind the development of the emote system primarily involve minimising harassment and preventing "those really negative experiences". This was also important in terms of increasing the accessibility of the game, especially to players who were not used to the often aggressive environment of online gaming chat. However, players are still able to interact with each other, and even be "mean" to each other, but "sort of in a friendly way".[1]

The system also increases the speed of gameplay, since players are not stopping to type to each other. It also allows players to express themselves in convenient sound-bites, making communication more of a "lightweight and quick experience", rather than an in-depth discussion during each game.[1]

'Lucky' and 'Good Game' emotes were available in the game's alpha, but were removed due to being "used for evil more than good":

"You know, we actually had a lucky emote in the game in our prototype and what ended up happening throughout our alpha testing was basically anytime your opponent did anything good you would emote “Lucky.” It felt really kinda bad because you felt you were making good plays and everything you did your opponent would go “Lucky, lucky, lucky” and you’d go “Come on! I just made a great play!” It was used for evil more than good. “Good game” we talked about as well, we even went so far as to record the audio good game emotes but we were really concerned with players preemptive gg’ing eachother because that feels bad. Players mostly use “Well Played” mostly for good game as well right now. We couldn’t come up with a way that let us have a good game emote and prevent players from using it in a negative way." - Ben Brode[2]

The developers have stated that they plan to look at expanding and improving the game's emote system in the future.[2]