This article is using {{Card template}}.
See Help:Style guide/Card for how to edit this kind of article.
Edit this article
Embrace Darkness
45308 • ICC_849
Regular 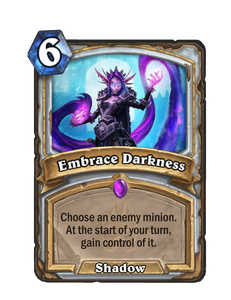 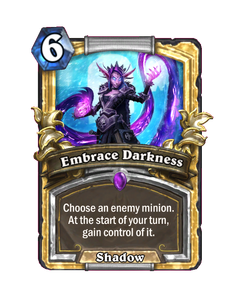 Dimensions: Full • 330 x 410px
Choose an enemy minion. At the start of your turn, gain control of it.
Flavor text

Once you both get comfortable, darkness is actually pretty snuggly. 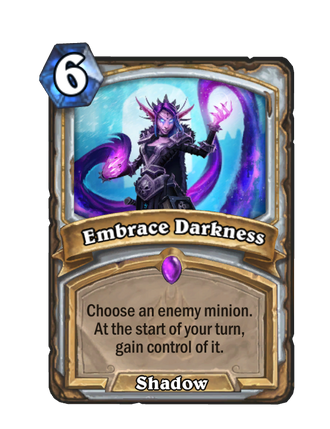 Embrace Darkness is an epic priest spell card, from the Knights of the Frozen Throne set.

Mind Control but delayed with 4 less cost. It is useful in stealing priest decks as it is another card (besides Mind Control) to take control of an opponent's minion allowing you to spend your 4 mana elsewhere.

When used in conjunction with Freeze effects or disposable taunt minions, you can neutralize the threat's attack for the turn before you gain control of it, guaranteeing your opponent doesn't get value from it. However, using two cards to steal one minion is not efficient enough to be worth it, so it usually is easier just to Mind Control it anyways.