This article is using {{Card template}}.
See Help:Style guide/Card for how to edit this kind of article.
Edit this article
Elwynn Boar
64723 • SW_075
Regular 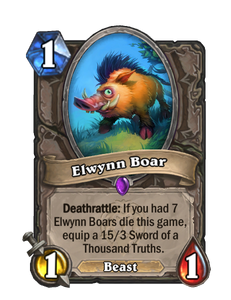 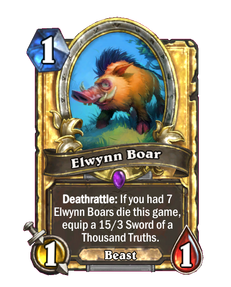 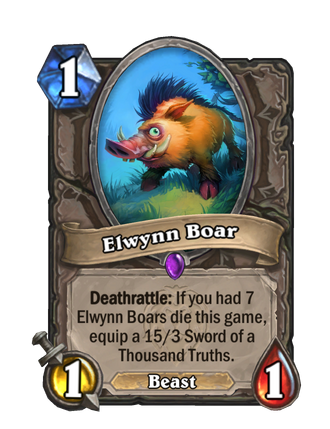 Elwynn Boar is an epic neutral minion card, from the United in Stormwind set.

Golden Elwynn Boar is uncraftable and cannot be crafted or disenchanted. 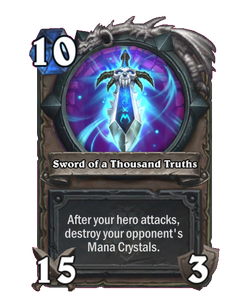 Although it is arduous to have 7 Elywnn Boars to die, fulfilling its condition is game-changing, almost certainly ensuring victory. There are of course caveats to take into account. First off, you must have a way to generate at least 5 more Boars, and subsequently kill 7 in order to satisfy the condition of its Deathrattle. Although you can only put 2 copies of Elywnn Boar in your deck, cards such as

Lab Recruiter can supply additional Boars. Below are a few strategies for each class.

Farming Elwynn Boars by itself isn't too difficult, however it is generally very low tempo. You must be able to maintain enough Health, ensure optimal board control as much as possible and have ample card draw, whether to draw out more boars or ensure the first two conditions. Without these three conditions/an alternative play strategy, you'd find yourself dead before you can even get to equipping the sword. For decks leaning on the lighter end,

Cornelius Roame is a reliable source of card draw.

Be mindful of your opponent's Transform effects, which will lower your boar count and likely slow your deck down even further. Your opponent can also trigger the seventh boar on their turn and destroy the Sword with

Acidic Swamp Ooze. It may be a good idea to kill off any boars you play immediately if possible, to play around these counters.

Sword of a Thousand Truths is extremely powerful once obtained, it's not necessarily an instant win condition. If your opponent has a large enough board, they can kill you without needing any mana. Classes like Rogue and Druid can also possibly build tempo even without mana if their hand was set up properly. It's important to make sure the board is stabilized before equipping the Sword.

Aside from Goldshire Farmer, Demon Hunter doesn't have many methods for duplicating/generating additional Elwynn Boars, save

Zai, the Incredible. However, they have a good Deathrattle synergy, and have plenty of card draw (

Sigil of Alacrity, etc.). Elwynn Boars could even be implemented into a Deathrattle Demon Hunter deck, although at the cost of much of that deck's tempo.

Elwynn Boar could find itself at home with an Aggro Druid deck, which specializes in empowering low cost minions for a quick, powerful board presence.

Oracle of Elune and

Living Seed (Rank 1) can be used to search Elwynn Boar from the deck. Druid struggles with board control however, and may fall behind while playing low-tempo 1/1s.

With an excellent Deathrattle synergy and a natural affinity with Beasts, Hunter is arguably the best class to use this minion with. The

Leatherworking Kit benefits from the death of your friendly Beasts, converting it to an effective method of drawing out Elwynn Boars from the deck. In addition,

Warsong Wrangler can simultaneously draw another, while giving them a sizeable +2/+1 buff.

Scavenger's Ingenuity brings in another with +2/+2.

Devouring Swarm can be used to kill off a board of boars in one turn and also add more copies to the hand. In Wild,

Revenge of the Wild can also be played as a follow up for a very large number of boars.

Potion of Illusion and even

Duplicate can cheat out two more, and

Ice Block can help ensure a two-turn lethal. However, the lack of Deathrattle synergy and non-spell draw power can prove to be a bit of a problem.

Although finnicky, Paladins have a gimmick in

Redemption can get you four more boars this way.

Gift of Luminance and

Rally! can also bring in more boars into play.

Emperor Wraps. It also makes for an effective strategy, since it offers an alternative way of play than just relying on completing the condition of Elwynn Boar.

Priests are quite the effective class to fulfil Elywnn Boar's conditions. Not only do the boars contribute towards the

Awaken the Makers quest, but Priest has ample options for resurrecting (

Priests are also the best class in effectively handling others who wish to equip the Sword of a Thousand Truths, through their silence effects (namely

Plague of Death and

Shard of the Naaru.). You must remember that at the 7th Boar onwards, if the controlling player had 6 or more dead before it, only upon its death would it equips the Sword. As a Priest, be sure to use your options wisely.

Rogue is by far one of the easiest classes to get 7 Elwynn Boars with.

Mimic Pod and more allow you to create more than enough copies of the Elwynn Boar. In addition, Rogues also have decent Deathrattle synergies with

Grand Empress Shek'zara can also be used to draw all copies of Elwynn Boar from the deck. However, Rogue suffers from extremely poor survivability.

Shamans have cards that can effectively resurrect Elwynn Boars upon death, such as

Vivid Spores, and even return them to your hand via

Spirit Echo. However, this kind of utility would better serve towards more powerful minions and could pose as a possible liability to your strategy.

Not recommended. Outside of

Raise Dead and a lot of luck, Warlock has no way to easily duplicate Elywnn Boars. While the class has good card draw, its better suited for faster

Not recommended. Although Warrior has great survivability and board control, they suffer from meagre card draw and can only readily duplicate damaged minions, something not easy with Elywnn Boars.