This article is using {{Card template}}.
See Help:Style guide/Card for how to edit this kind of article.
Edit this article
Elven Archer
389 • CS2_189
Regular 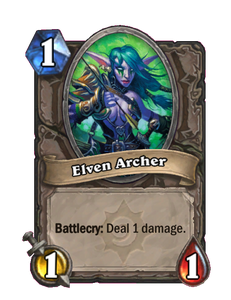 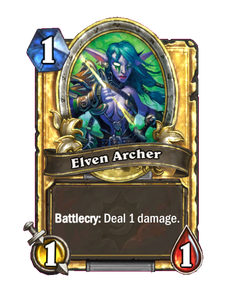 Don't bother asking her out on a date. She'll shoot you down. 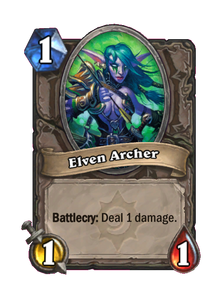 Elven Archer is a neutral minion card, inducted into the Legacy set, formerly from the Basic set. 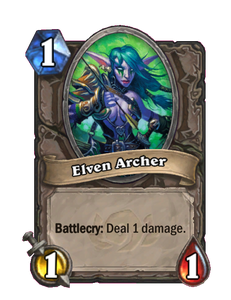 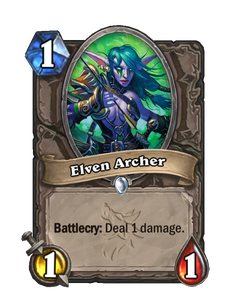 Regular and golden Elven Archer are uncraftable and cannot be crafted or disenchanted.

Two copies of regular Elven Archer are obtained for raising sum of all your class levels to 1.

Two copies of golden Elven Archer (Core) are obtained for winning 500 games across all classes.

Elven Archer (Core) is uncraftable and cannot be crafted or disenchanted.

This card's Battlecry can be versatile considering it can be used on any minion or hero on either side of the field. Useful for picking off weak/weakened minions (has great synergy with Hunter's Mark) or for popping a Divine Shield. Hunters, however, might consider using On the Hunt instead, as it functions identically, but the summoned 1/1 minion is a Beast.

Because the Battlecry can be used on friendly minions, it also has good synergy with minions that Enrage, such as Raging Worgen or Bloodhoof Brave. By playing this card on the same turn, you can create more value out of cards which rely on powerful Enrages and force your opponent to deal with a more potent threat.

If this is the only card you can play on turn 1, it is usually better to do nothing instead of spending the shot on the enemy hero. 1 damage to the face on turn 1 is trivial, and can be easily healed or otherwise mitigated early on, and all you have to show for this is an easily killed 1/1. The Elven Archer is at her best when attacking minions, with her Battlecry usually more valuable than her 1/1 body.

The Sentinels were established shortly after the War of the Ancients, and until recently all of its soldiers were night elf women. The Sentinels are courageous and selfless soldiers whose only goal for the last ten millennia has been to defend the night elf people. New recruits undergo extensive training, and as time permits, the more experienced warriors undergo frequent combat drills. The Third War resulted in many losses for the Sentinels, but the army still boasts a number of battle-hardened veterans.