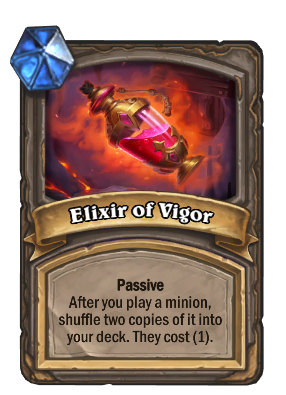 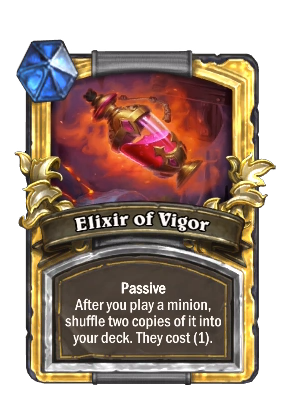 Passive After you play a minion, shuffle two copies of it into your deck. They cost (1).
External links

Elixir of Vigor can be drafted and added to a Duels deck after round 3. However, being an ultra rare treasure, it has only 1% chance to be offered.

Elixir of Vigor is uncollectible and unavailable in any other game modes.

Elixir of Vigor can be drafted as a passive treasure in the following adventures:

Elixir of Vigor is a very powerful card that can completely change the way a deck is played. While its stated effect is simple and easy to use, the reach it has and consequent effect on any and every type of deck cannot be overstated. Elixir of Vigor provides an endless amount of minions and cards to be played, all at the dirt cheap price of 1 mana, thus giving it immense synergy with almost every kind of deck that utilizes minions to some extent, which is to say, almost all of them. It boasts substantially greater synergy with high cost and very powerful minions that are riskier or harder to find an opening to play such as Ragnaros the Firelord or Malygos. Even 10 cost or higher minions can be great investments into your deck that can quickly ramp up and over any sort of defense your opponent could mount, due to both their endless nature and cheap cost to use. A single minion can turn into a veritably infinite army with Elixir of Vigor, thus making this card easily one of the most powerful sources of minion generation in the game.

That said, by it's nature of endlessly replicating minions and filling your deck, some decks that require specific cards or effects may have a hard time justifying adding Elixir of Vigor, such as C'Thun, the Shattered or very spell focused decks, since it can very easily overfill your deck with endless amounts of minions and make it substantially harder to acquire necessary cards to effectively utilize the deck. To that effect, cards like Zephrys the Great and Mecha'thun become near useless with Elixir of Vigor since the conditions for their effects are effectively nullified by it, and thus greatly clash with it. Even despite these drawbacks however, some players may find the benefits of Elixir of Vigor to be worth potentially ruining their deck flow for because of its endless and powerful use.

A notable fringe benefit of Elixir of Vigor is that with the endless amounts of minions placed into the deck, it greatly counters Mill and effectively removes Fatigue as a threat from your deck.

Editor note: Article is finished, and stub section template needs to be removed. Only a fandom admin can do this. 4/2/21