This article is using {{Card template}}.
See Help:Style guide/Card for how to edit this kind of article.
Edit this article
Elise the Trailblazer
41935 • UNG_851
Regular 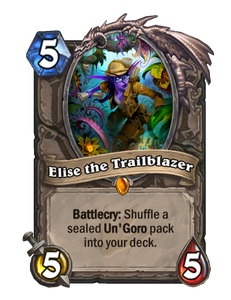 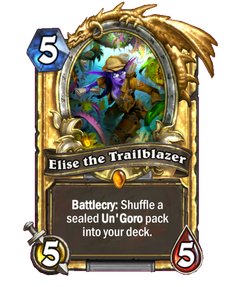 Reno taught her that blazing her own trail is a lot more fun than following someone else's map. 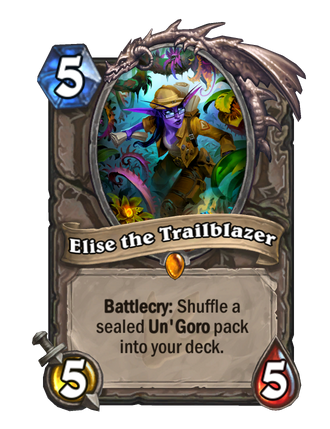 Elise the Trailblazer is a legendary neutral minion card, from the Journey to Un'Goro set. 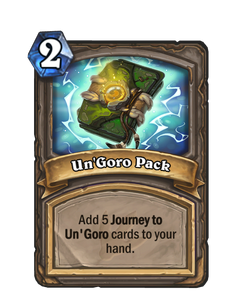 Example: A priest has 7 cards in hand, then plays an Un'Goro Pack. The played Pack brings the hand size to 6, then the Pack animates 4 cards being opened and placed into the hand. There is no fifth card.[2]

Elise the Trailblazer has adequate stats for her mana cost. Fittingly similar to

Elise Starseeker, her true power will come in time, and thus is used best in decks that will either stall to attrition or quickly cycle through the deck.

Un'Goro Pack's 5 cards for 2 mana is excellent value, but it must be kept in mind that these cards will be completely random, and as such may not fit in with your deck's synergy. That being said, if at least two of the cards added to your hand are useful, then you've gotten more value out of Un'Goro Pack than

Arcane Intellect, its closest comparison of drawing for mana cost.

Elise Starseeker, specifically during her expedition to Un'Goro.

Elise's Darnassian attack phrase is a druidic attack spell commanding the plants to fight on her behalf.[3]

Amongst the four children Elise was guiding ~1m21s into the reveal trailer of Journey to Un'Goro (they salute her at the end) three resembled adult mercenaries later seen in the Forged in the Barrens set:

After this was highlighted on Reddit,[4] Matt London initially replied to a "kids are all grown up?" question about this on Twitter stating it was non-coincidental, implying it was intended.,[5] but later the day in response to a reaction[6] stated he did not intend to confirm anything.[7]

Elise the Trailblazer had a lot of design iteration. One earlier version of her effect saw her "Discover a Quest". Once the Quest was discovered, she'd also provide a package of helper cards in your deck to help complete it. However, the effect made Quests overall feel "less cool" and discouraged Quest-oriented deckbuilding. Around the same time, Elise's

Un'Goro Pack was originally destined to be the Priest quest reward, but it didn't feel powerful enough for completing the Quest, leading designers to realize it was "a natural fit" for Elise instead.[8]