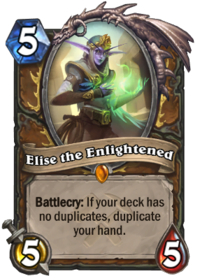 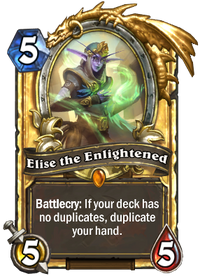 Battlecry: If your deck has no duplicates, duplicate your hand.
Flavor text

From cartographer to combatant, Elise has taken the road less traveled—because no one else could find it on a map.

Elise the Enlightened is a legendary druid minion card, from the Saviors of Uldum set.

Elise the Enlightened can be obtained through Saviors of Uldum card packs, or through crafting.

While Elise's effect is somewhat counterintuitive since you can run two copies of most cards in your deck otherwise, much of her power comes from being able to copy Legendary cards. Having access to an extra copy of cards like Zephrys the Great, Zilliax, Barista Lynchen, Wardruid Loti, or Siamat can dramatically increase the quality of your hand. You can even play Flobbidinous Floop afterwards to triple or quadruple a specific card. Even when copying non-Legendary cards, Elise grants a ton of immediate value on a decently statted body, giving you more cards to play without sacrificing much tempo.

Elise can be used to set up OTK combos using Flobbidinous Floop with the exact hand. Use Elise to copy Floop, BEEEES!!!, and Pounce with Floop's Glorious Gloop active, then continuously kill your Floop-copied Elise while stacking up attack from Pounce. In Wild, you can use Elise to copy Floop, Twig of the World Tree, and Naturalize to create an infinite mill combo.

This card represents Elise Starseeker as she appears during the events of Saviors of Uldum.