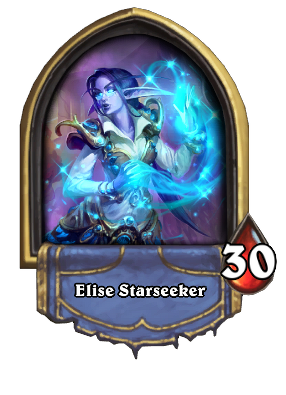 Elise Starseeker is an alternate hero for the

Elise is unavailable to new players. It's unknown if she will become available again.

Elise Starseeker was only obtainable by purchasing the Saviors of Uldum Mega Bundle, which was only purchasable with real money.

Once unlocked and selected for use, Elise Starseeker replaces Malfurion Stormrage whenever playing with a druid deck. Elise Starseeker comes with her own portrait, emotes, and hero tray art, as well as featuring a special animation when using Elise Starseeker's Hero Power, Shapeshift (or its upgraded version, Dire Shapeshift).

When viewed in the Collection, Elise Starseeker has the following flavor text:

Before she became an explorer, Elise taught young druids. Her ability to tolerate immature minds hasn't changed at all!