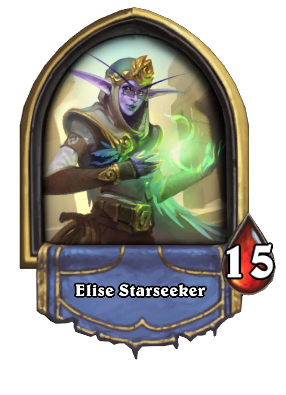 Whether she needs magic or a trusty machete, Elise is ready to save Uldum.

Elise Starseeker is a hero that the player can pick in a Tombs of Terror run. She represents the dual class of Druid and Priest. 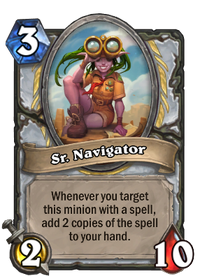 Solo Adventure screen
Fire, Madness… Murlocs! Rafaam has unleashed the Plagues of Uldum, and only we can stop him. Explorers, to me!
Uldum Map screen
I’ve collated eyewitness reports to triangulate the origin of the plagues. We’ll tackle each one at its source.
Hero selection screen

We’ve all trained for this. The four of us are more powerful – and flexible – than ever before.

There are artifacts in Uldum that can aid us in our quest. But we must find them!

A true explorer never stops training. There are skills I have yet to learn!

Success begins with preparation. Where shall I start?

My quest begins here! With each victory, I expect to face more difficult foes.

Our enemies grow stronger. But I'm getting more powerful, as well.

There – that’s a Plague Lord! One of the sources of all this horror!

Uldum is rich with treasures, but I’ll need to be smart to take advantage of them.

Time to gear up for my next encounter. Should I focus on my druidic skills or priestly magic…?

I need to put my weapons away here. But this is a great opportunity.

I was outplayed that time… but I learned a thing or two for my next attempt.

Everyone, regroup! If we damage the Plague Lord a little every time, we will eventually triumph.

Friendly Encounters
Who in the world would run an inn in the middle of this place?
I might be able to recruit some help here…
I smell food… and hear… laughter? What IS this place?
Turn 1 on first boss in Chapter 1

Elise Starseeker
This murloc plague will destroy the world!
Sir Finley
I shall endeavor not to take offense.

Elise Starseeker
The madness is here… none of my maps make any sense…
Brann Bronzebeard
Put the maps away fer once an’ go wit’ yer gut, Elise!

Elise Starseeker
Any secrets this tomb holds are being destroyed by E.V.I.L. thugs!
Reno Jackson
Elise, there is a time for careful study. And a time to punch faces. It’s face-punching time.

Elise Starseeker
These halls… so ancient… so complex!
Reno Jackson
Yes yes, you and Brann can come back and study this place after we save the world!

This thing is bigger than I thought!
I will not defeat it in one battle… but I can weaken it!
Stay focused. It can’t regenerate – do what damage you can, and we will finish it off later! (responds to any other hero)

Getting scarabs to work in my favor is… nice.

Shh. I need to concentrate.

There isn't as much jungle to cut through, but it has its uses.

The League appreciates your assistance with this, Addarah.
It's great to have an expert with us, Addarah.

You're doing a great job, explorer.

Unlike Reno, I don't go "where the wind takes me". I go where the map leads.

The Titans harnessed so much power in such a small object…

We grabbed this one for educational purposes, contrary to what Reno thinks.