This article is using {{Card template}}.
See Help:Style guide/Card for how to edit this kind of article.
Edit this article
Elise Starseeker
2951 • LOE_079
Regular 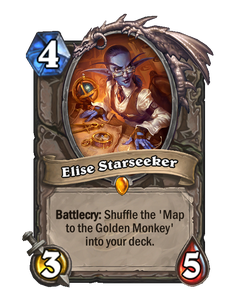 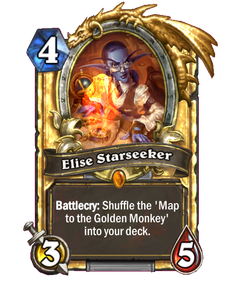 A large part of her job entails not mixing up the Map to the Golden Monkey with the Map to Monkey Island. 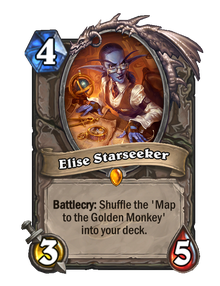 Elise Starseeker is a legendary neutral minion card, from the League of Explorers set. 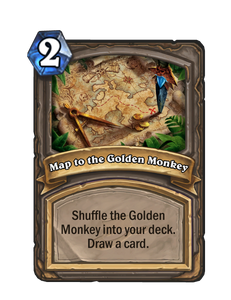 Elise Starseeker is a minion with decent stats for a 4-cost card, and features a highly unique and powerful effect. By playing the Map to the Golden Monkey and the Golden Monkey in turn, all of your hand and deck's remaining cards are converted into legendary minions. Due to their high average of quality and special effects, this can provide a huge stream of threats that overwhelm the opponent, making it a great win condition.

Elise is excellent in a control-oriented deck, which already have the removal and healing spells needed to stall the game. This makes playing the Map and the Golden Monkey inevitable come late-game. Elise herself is a solid minion in the mid-game, and can help with board control against more aggressive opponents.

Elise can also be good in decks that can cycle through their deck quickly, such as mill decks. The Rogue spell Gang Up can be helpful, since Elise herself doesn't have too bad stats, and added maps means more possibility of Golden Monkeys. The Map to the Golden Monkey can also be used as a combo spell if you don't have anything else, and three Golden Monkeys make the all-legendary ability far more likely to trigger. She also delays Fatigue by one turn by adding two cards to the deck, one of which has a card draw effect.

Be wary of Priest opponents, who can Thoughtsteal, Drakonid Operative, Convert or Holy Water the Golden Monkey and use it for themselves.

If playing a Reno Jackson deck, be wary also of triggering Elise's Battlecry more than once (through Brann Bronzebeard, copy effects, or return to hand effects). It will add multiple maps to the deck, disabling Reno's heal condition until all of the maps but one are drawn.

The night elf Elise Starseeker is original to Hearthstone.

She's got a lead on the long-lost Staff of Origination - and she needs your help to find it![1]

"Elise has been on hundreds of League expeditions, she's created a huge catalog of maps and charts, she loves navigation and cartography, but her biggest joy is locating ancient artifacts, that are so old that they are just whispered about in taverns."[2]

Elise returns in Journey to Un'Goro as a new card, Elise the Trailblazer. She also appears in the trailer for the expansion, leading an expedition to Un'Goro Crater and explaining its dangers to a group of children following her.

Elise returns once more in Saviors of Uldum with the rest of the League of Explorers to stop the League of E.V.I.L.'s plans in Uldum, this time being known as Elise the Enlightened.