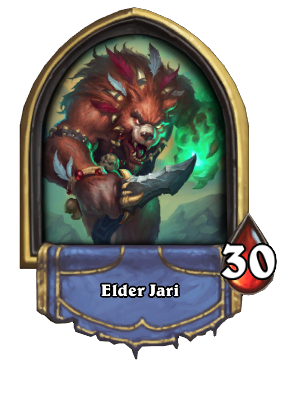 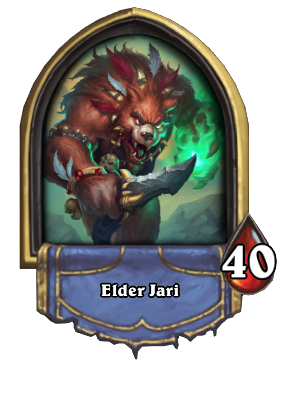 This furbolg elder\ncalls arcane energies to her defense.
External links

Elder Jari is a boss that can be encountered during the Dungeon Run.

Elder Jari's Hero Power not only gives her a lot of extra health to make her near-impossible to kill quickly, but it also easily enables some of her armor-dependent cards like Ironwood Golem and Lesser Jasper Spellstone. She largely plays like a Ramp Druid player, having next to no cheap minions and no early-game pressure. Once she hits 10 mana, she starts dropping big threats like Ancient of War, Ysera, Ultimate Infestation, Kun the Forgotten King and Tyrantus, but once those threats are dealt with she has little left in the way of actually threatening you.

Since she gains armor very quickly and her Taunt minions are very tough, only the fastest of aggro decks can get away with trying to burst her down. Save your removal for her biggest minions, and without much left to threaten with, it becomes a matter of fatigue, which she is more likely to succumb to first after drawing cards from Ultimate Infestation.

Elder Jari
Spirits of old! I call upon you.

Elder Jari
The spirits of old... really don't like you very much.

Elder Jari
I fight without fear.
Mighty are the ancients!
Release your treasures to me, your cause is hopeless!
I give thanks to those that came before.

Elder Jari
Praise to the Ancient - My protection and My salvation.

Elder Jari is unique to Hearthstone. She can create unbreakable armour around her thanks to the old ways.