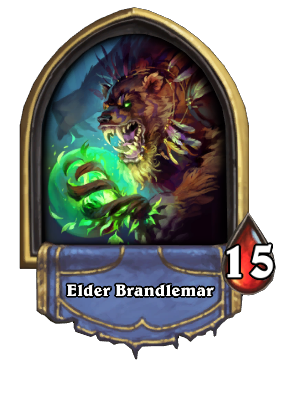 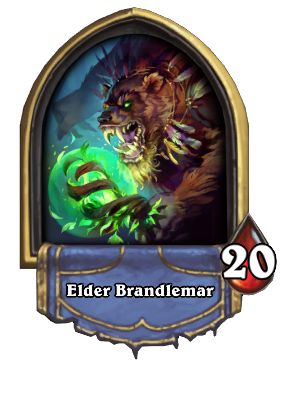 The bane of magic users, this furbolg can counter any spell.
External links

Elder Brandlemar is a boss that can be encountered during the Dungeon Run.

Focus on fielding minions as your main source of damage, as his Counterspells can easily stop any spell-based assault. Even for Mages, you should still have a respectable minion base in your deck this early to do the job, and your Hero Power should be able to get additional damage in. In the off chance that you need your spells to finish him off, always keep a cheap spell handy to clear away his Counterspell to let the desired spell connect.

Mulligan for an aggressive curve against Brandlemar. He lacks low-cost minions so you can get in some good hits unhindered before he gets to play anything.

Should you require to use a spell, keep in mind that he can only have one Counterspell at a time. If you have a cheap enough spell, play it before you play the desired card.

Another thing to keep in mind is that his hero power requires 2 mana. You can simply toss a spell to slow him down as he is forced to reapply it.

Elder Brandlemar
If you seek peace, leave your treasures and go.

Hero Power
The old way cannot be overcome.
My magic is stronger than yours.
Your strength wanes.
Your magic only feeds the warren.
Silence!

Elder Brandlemar
Turn away... only doom awaits below!

Elder Brandlemar
Your body remains, but your soul is finally free.

Elder Brandlemar is unique to Hearthstone. He appears to warn adventurers of a darkness below.