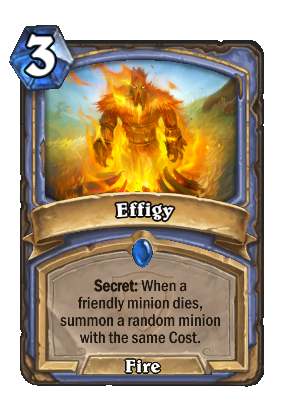 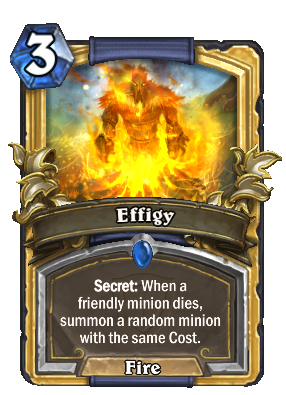 Secret: When a friendly minion dies, summon a random minion with the same Cost.
Flavor text

Effigy is a rare mage spell card, from the Grand Tournament set.

Effigy can be obtained through The Grand Tournament card packs, or through crafting.

This card is a Secret that generates tempo by summoning a new minion after one of them dies. Can be useful for tempo mage decks due to this, but keep in mind your opponent can play around this card by destroying the lowest costing minion on your board, so keep your current selection of minions in mind when playing this card.

Should your board be empty, consider using other spells such as Frost Nova or Flamestrike on the same turn as Effigy in order to gain safety for one turn before playing a high costing minion the following turn. This allows a guarantee that the only destroyable target for Effigy to trigger on to be minions normally too high to play on the same turn, such as Ysera or Deathwing.

A Wickerman is burned by the Forsaken near the walls of Lordaeron during the Wickerman Festival to honor Queen Sylvanas and their escape from the Scourge. After the Cataclysm, Gilneas reintroduces the practice of burning the Wickerman to the Alliance. For the Alliance, the wickerman embodies any unrest, fear, or uncertainty within them. They set it ablaze with the hope of tempering themselves against whatever tomorrow may bring. Gilneans burn one outside of Stormwind City. Smaller wickermen are also burned in other parts of the world during Hallow's End in order to practice putting out fires from the attacks by the Headless Horseman. The Moonkin of Silvermyst Isle also have a Wickerman.