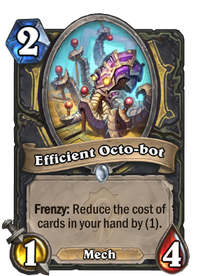 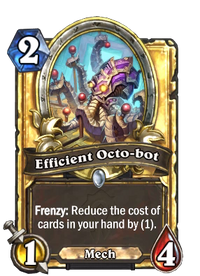 Frenzy: Reduce the cost of cards in your hand by (1).
Flavor text

Efficient Octo-bot is a common rogue minion card, from the Forged in the Barrens set.

Efficient Octo-bot can be obtained through Forged in the Barrens card packs, through crafting, or as an Arena reward.

A two-Mana minion with a potentially very powerful effect. Its Frenzy ability requires it to take damage and survive, though given its stats, this can be relatively easy to accomplish in the early game by trading into the opponent's early drops ; its four Health statline means that there is a good chance it will survive most attacks at that point in the game. If its effect is triggered, then this is an Emperor Thaurissan-like reduction for only two Mana, which, depending on the Rogue deck, can be incredibly strong. Its Mech tag can be relevant, particularly in Wild, since it can be cheated out early with cards like Mechwarper, or buffed with cards like Zilliax.

Later in the game, this minion loses some of its value as it becomes easier to remove in one hit, or with single removal spells, and since it has no additional abilities, as well as low Attack, its presence on the board can be easy to ignore if the opponent is playing aggressively. Remember, though, that it is always possible to activate this effect yourself: Backstab or Brain Freeze are examples of low-cost spells that can trigger it, and some cards, like Animated Broomstick, can grant it Rush to allow it to attack immediately.

This being a 1-Attack minion with a triggered effect, beware when playing this card against Priest. Cabal Shadow Priest, Cabal Acolyte and Potion of Madness are all examples of cards that can be used against the Octo-bot, turning its effect against you, and it can be very dangerous to reduce the cost of cards in a Control Priest's hand. In this matchup, it is almost always preferable to trigger it the turn you play it, and not wait for a later turn.

In general, this is a flexible minion that can be used either in more aggressive decks to make big tempo pushes in single turns by allowing large amounts of cards to be played, or in more late-game oriented decks to cheat out more expensive sets of cards.