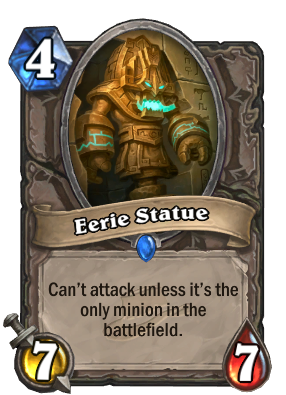 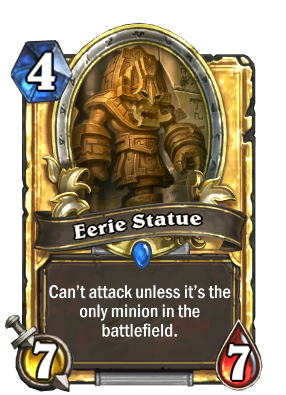 Can’t attack unless it’s the only minion in the battlefield.
Flavor text

Don't blink! Don't turn your back, don't look away, and DON'T BLINK.

Eerie Statue is a rare neutral minion card, from the League of Explorers set.

Two copies of regular Eerie Statue are obtained by defeating Rafaam Unleashed, the fourth boss in The League of Explorers's fourth wing, the Hall of Explorers.

As a Wild format card, both regular and golden versions of Eerie Statue can also be crafted for the following amounts:

Like Ancient Watcher this card is great when given Taunt or Silenced. This card also shines in a top deck war as in these cases the field is often nearly empty.

If the player is able to activate its effect, this becomes a powerful and extremely efficient card, providing a 7/7 for just 4 mana.

This minion could make sense in a control deck focused around removal, especially if combined with AoE removal like Flamestrike.

Eerie Statue is best countered by ensuring you have a steady supply of minions on the board. Watch out for removal effects that can clear your board, though, as this will allow the Statue free rein.

As long as someone is looking in the Statue's direction, it will be as still as stone. But as soon as everyone looks away, it comes to life, creaking into action.[1]