This article is using {{Card template}}.
See Help:Style guide/Card for how to edit this kind of article.
Edit this article
Edwin VanCleef
306 • EX1_613
Regular 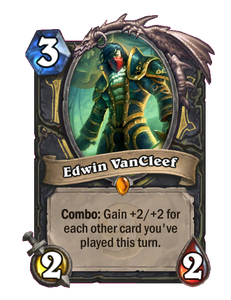 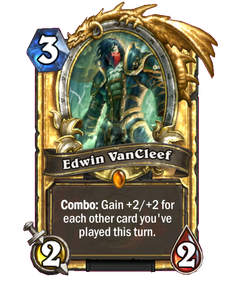 He led the Stonemasons in the reconstruction of Stormwind, and when the nobles refused to pay, he founded the Defias Brotherhood to, well, deconstruct Stormwind. 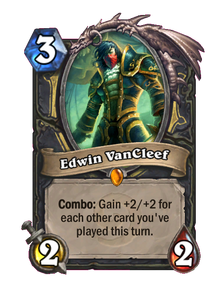 Edwin VanCleef is a legendary rogue minion card, inducted into the Legacy set, formerly from the Classic set. 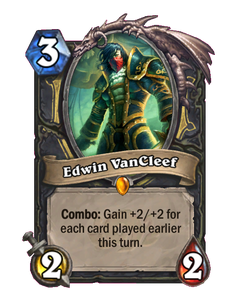 Edwin VanCleef is a card can be used effectively at any stage of the game. While he can be effective early, the summoning rogue could get much more out of the Combo when they can fire off several spells first. However, a turn 1 or 2 Edwin at 6/6 or 8/8 can often win the game if the opponent doesn't have an answer for it. Players planning on making a deck around Edwin VanCleef should have lots of cheap spells and card draw.

Be careful when relying on Edwin; he is vulnerable to Silence and if his Attack becomes 7 or higher he can be destroyed by Big Game Hunter. Silenced, or without activating VanCleef's Combo, he is a lackluster 2/2 for 3 mana.

VanCleef is often used as a 'big minion' card in Combo rogue decks such as Miracle Rogue. He is usually played after a flurry of spells, ideally with a Gadgetzan Auctioneer to make sure the hand isn't emptied as a result. VanCleef can also be effective earlier on, on occasion making a good early game play - even an 8/8 VanCleef can be a terrifying presence on turn 3 - and combos well with The Coin. However, be wary of placing all your eggs in one basket, as VanCleef is easily neutralised, potentially leaving the player several cards down and lacking comeback options. For this reason he is best used as a synergistic card in a spell or Combo deck rather than as a win condition in himself.

While not an ideal usage, VanCleef at his worst can be added to most Rogue decks even if he does not directly support them. Simply playing Edwin at the end of an otherwise finished, unremarkable turn can allow for what is essentially a discounted 6/6 or 8/8.

Summon
The Brotherhood shall prevail.

Attack
Lapdogs, all of you!

Edwin VanCleef was originally one of the architects that worked on the rebuilding of Stormwind City after its destruction at the end of the Second War. He also led the construction of Nethergarde Keep, which was commissioned to keep watch over the Dark Portal. After the city's reconstruction was finished, the House of Nobles, under the influence of Katrana Prestor refused to adequately pay, with the House of Nobles only offering meager compensation while the Stonemasons continued to demand extravagant sums. Though the Stonemasons were compensated for their work, they received only a fraction of the pay they felt they had earned; and so Edwin VanCleef and the Stonemasons set to rioting in the streets of Stormwind, demanding just compensation. The riot was dangerous and chaotic and in the confusion Varian's young queen was brutally murdered. Edwin VanCleef fled Stormwind with the Stonemasons and formed the Defias Brotherhood.

"None may challenge the Brotherhood!"

Edwin Vancleef was slain by Alliance adventurers. However, the Brotherhood did not die with him. The Defias Brotherhood's reins were left in the hands of his daughter, Vanessa VanCleef. Although Vanessa isn't exactly skilled in hand to hand combat she is an avid user of poisons, especially ones that cause insanity and corrupt the mind.