This article is using {{Card template}}.
See Help:Style guide/Card for how to edit this kind of article.
Edit this article
Educated Elekk
60090 • SCH_714
Regular 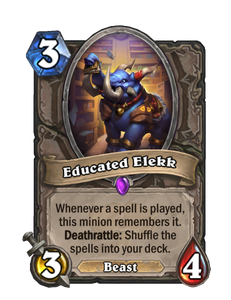 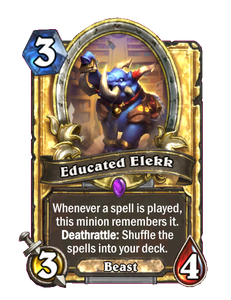 Dimensions: Full • 330 x 410px
Whenever a spell is played, this minion remembers it. Deathrattle: Shuffle the spells into your deck.
Flavor text

"This reminds me of a saying. 'An elekk never…' something. I can't remember." 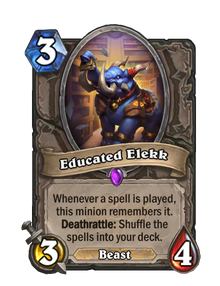 Educated Elekk is an epic neutral minion card, from the Scholomance Academy set.

Educated Elekk is a quirky variant of Augmented Elekk, except that it doesn't have immediate deck synergies since it absorbs all Spell cards played by both players. While this means you can reuse crucial tools such as draw power and removal, including those played by your opponent, you don't have instant access to those tools unless you draw into them. Combined with the fact that your opponent's Spells might not synergize with your deck strategy, Educated Elekk isn't a priority pick for most archetypes. That said, decks such as Libram Paladin and tempo builds of Mage or Rogue could benefit from the extra copies of their Spells, which may make Educated Elekk something of a Soft Taunt as the only way to neuter the value advantage of this card is Silence strategies or killing it off early.

The mana cost and Beast tribe of this card gives an immense boost to Exotic Mountseller builds of Spell Druid.

Particularly in Wild, Educated Elekk's capture of your opponent's Spells allow it to synergize with Thief Rogue, albeit much more slowly. If left unchecked it could provide plenty of ammunition to build your Spectral Cutlass with.

By adding additional copies of Spells to your deck, Educated Elekk synergizes with Fatigue Warrior and similar strategies, while also providing other decks such as Resurrect Priest a tech against fatigue or mill-centered decks.