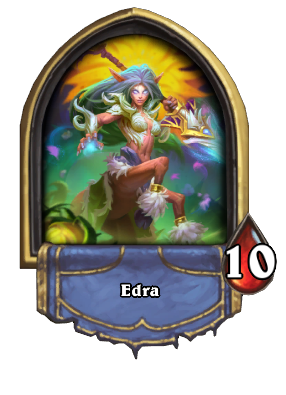 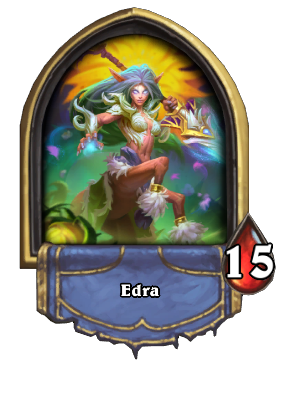 The ancient lifewardens guard this sacred space with their life(steal).

Edra is a boss that can be encountered initially in Chapter 4 of Tombs of Terror. After completing Chapter 4, this boss encounter will be available in any completed chapter.

In Normal mode Edra is a weak version of Token Druid withous strong minions or spells. Most of her minions die from weak AoE or 1-2 mana minions. Constant keeping Edra's board empty will not be difficult with AoE, and if is it missing, it would be better to kill only the minions with Lifesteal. Since Edra has 10 or 15 HP only, she will be often trading with player's minions, giving an ability to deal damage to her.

In Heroic mode Edra captures the board much faster and can also buff it with Power of the Wild. Also she can have Crypt Lord and Wardruid Loti, who are able to turn the outcome of the battle in favor of Edra. Therefore, in Heroic mode, it is desirable to kill all her minions regardless of the presence or absence of AoE, as well as expose as many minions as possible to reduce damage to the player's hero. As with other low-level initial bosses, idle will not be fatal only with Primordial Bulwark passive or Addarah in hand.

Most of signature treasures play equally well in both modes and such passives as Primordial Bulwark, Band of Scarabs, Disks of Swiftness, Glyph of Warding and Rocket Backpacks.

Edra
Horrible plagues run rampant and then YOU show up…
You stand between me and my duty, little murloc! (vs. Sir Finley)

Elise Starseeker
Dryad! We come in the service of life as well!
Edra
I don't believe you!

Edra
If you expect me to believe those aren't related... well, I won't!

Edra
Ancients do no wrong.
You're angering the spirits!
I am not alone.
I'll wisp you away!

Edra
There's a devastating plague, and you're busy fighting ME?
What if something cute and fuzzy dies? I'd feel so guilty!
I never thought pest control would apply to explorers...

Let's play with this one!

We should "tend" to these intruders.

Keeper of the Grove

Keep it together! These "explorers" are stomping all over our turf!

Edra is unique to Hearthstone.