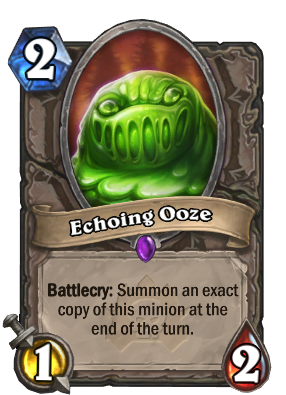 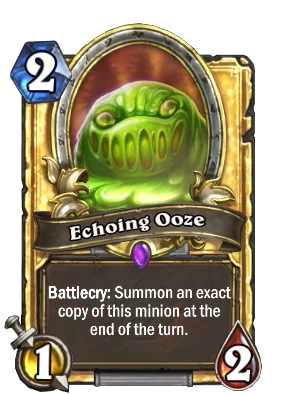 Uncollectible
Battlecry: Summon an exact copy of this minion at the end of the turn.
Flavor text

Echoing Ooze is an epic neutral minion card, from the Naxxramas set.

As a Wild format card, both regular and golden versions of Echoing Ooze can also be crafted for the following amounts:

Echoing Ooze works well with druid decks focusing on putting as many bodies on the field as possible, especially during the early to mid-game. Its low cost and 2-for-1 mechanic can allow the druid to quickly flood the board with minions, which can then be buffed by Savage Roar to deal huge amounts of damage, either finishing the opponent outright or making it impossible for them to recover.

It also works well in paladin decks, when used in conjunction with their powerful buffs such as Blessing of Kings. Sword of Justice is also worth considering in a deck running Ooze since it will grant two buffs, one for summoning the first Ooze, and a second one to the newly summoned second Ooze; the first buff also being copied to the second Ooze. As a result, playing Echoing Ooze without any other buffs will give you a 2/3 and a 3/4 for 2 mana.

Echoing Ooze was originally envisioned as a 2 Mana, 1/1 Minion, named "Bile Sludge", that had the effect "Deathrattle: Summon two copies of this minion. If you have 7 minions, destroy them all.". [9]