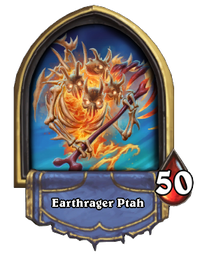 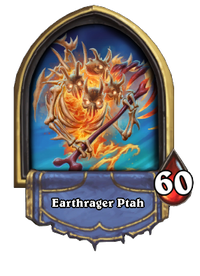 Avoid meeting Ptah's gaze. Or standing next to anyone who does.

Earthrager Ptah is a boss that can be encountered initially in Chapter 4 of Tombs of Terror. After completing Chapter 4, this boss encounter will be available in any completed chapter.

Earthrager Ptah
Ptah does not converse with mortals!

Earthrager Ptah
Fall before Ptah!
Ptah will annihilate you!
Raaaaaaaaaage!
The power of Ptah is unmatched!
You will be shattered!

Earthrager Ptah
Plagues underscore the wrath of Ptah.
Ptah serves no one.
Ptah tires of raging. Ptah needs a nap.

Burn away these shackles!

Do you MOCK Ptah?!

Al'Akir! Begone! You have no power here!

Riding camels won't save you from Ptah this time!

Earthrager Ptah is a bone wraith that appears in World of Warcraft as a boss of Halls of Origination dungeon.

Outside Earthrager Ptah's tomb, the sand is littered with the bones of the creatures purified by Anhuur. It is said that Ptah can bend these remains to his will and send them against beings who manage to elude the facility's first line of defense.