This article is using {{Card template}}.
See Help:Style guide/Card for how to edit this kind of article.
Edit this article
Earthquake
54160 • ULD_181
Regular 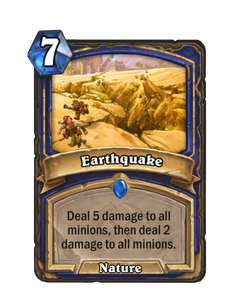 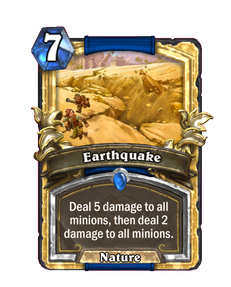 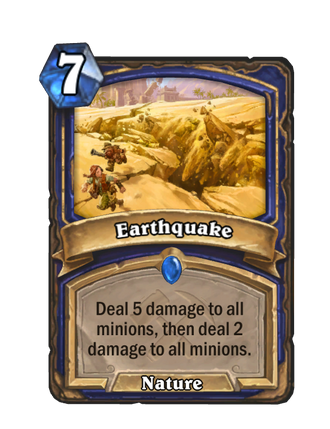 Earthquake is a rare shaman spell card, from the Saviors of Uldum set.

SN1P-SN4P is destroyed by the first round, summoning both Microbots before the second activates.
eg: You have a

Earthquake is a strong board clear, able to deal with up to 7 health and clear sticky minions. At its most simple, Earthquake is a

Flamestrike with 2 additional damage. Although the effect is symmetrical, this can be mitigated by playing Earthquake from an empty board.

Earthquake is an ideal way to deal with Reborn and certain Deathrattle minions. The 5 damage is enough to kill most targets, and the additional 2 damage will clear summoned minions such as Microbots, Spectral Spiders, and anything Reborn.

Earthquake is notably bad against Divine Shield. The shield will absorb the initial 5 damage and the minion will only take 2. Without easy access to a ping, Shamans may have trouble dealing with multiple Divine Shields.

Compared to other big Shaman board clears:

Volcano is much cheaper and can deal with a single minion more cleanly, but it features a heavy Overload.

Lightning Storm has less damage but is far cheaper and is not symmetrical.

Elemental Destruction is very cheap but has a hefty Overload, making it better for decks that can stabilize in a single turn.

Hagatha's Scheme has far more damage potential, but takes a long time to reach it. No other card has Earthquake's dual damage effect.

Earthquake originally appeared as the Ultimate ability for the Far Seer hero unit in Warcraft III: Reign of Chaos, where it causes the Far Seer to channel an earthquake in a large area for up to 25 seconds, continuously damaging buildings and significantly slowing units. In World of Warcraft, Earthquake is an Elemental shaman ability which instantly causes an earthquake in a target area for 6 seconds, damaging and sometimes knocking down enemies caught in it.