This article is using {{Card template}}.
See Help:Style guide/Card for how to edit this kind of article.
Edit this article
Earthen Ring Farseer
1651 • CS2_117
Regular 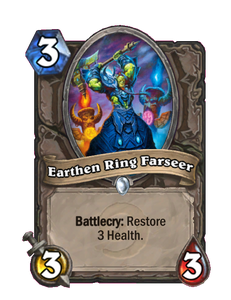 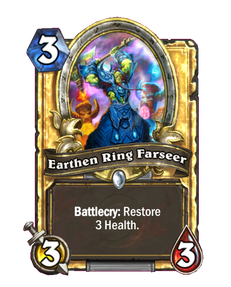 He can see really far, and he doesn't use a telescope like those filthy pirates.

Earthen Ring Farseer is a common neutral minion card, inducted into the Legacy set, formerly from the Classic set. 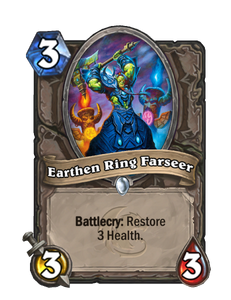 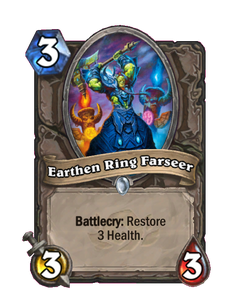 Two copies of regular Earthen Ring Farseer (Core) are obtained for raising sum of all your class levels to 1.

Two copies of golden Earthen Ring Farseer (Core) are obtained for winning 500 games across all classes.

Earthen Ring Farseer (Core) is uncraftable and cannot be crafted or disenchanted.

Earthen Ring Farseer is worth its cost only if its Battlecry is not wasted, so players should generally make sure that there is a friendly character to heal on the board before playing this card. You may use it to heal your hero (especially if they are already low on Health), but in most cases, healing a valuable but injured minion is a better option. For example, playing this card immediately after playing Injured Blademaster would be an excellent combo. The ability to direct this minion's healing provides good versatility and helps to ensure its Battlecry does not go to waste.

In some cases it can be worth saving this card until a particularly useful opportunity for its healing presents itself. However, as long as its Battlecry is not wasted altogether, the minion can be considered efficient.

Earthen Ring Farseer is one of the most popular neutral healing effects in the game, alongside the heftier but less flexible Antique Healbot. Its powerful Battlecry makes it an excellent target for return effects such as Shadowstep.

The Earthen Ring is the most influential shamanistic organization on Azeroth. The Earthen Ring is a shamanistic group dedicated to studying and preserving the elements. They have forgotten more about crazy old gods, ancient legends and lore than most scholars will ever know. It is led by a group known as the Elder Council, and members of the Earthen Ring believe that the Forsaken can be cured of the plague of undeath. Although Horde-based, some of the Earthen Ring are diplomatic towards the Alliance and a select few are closely associated with it.