This article is using {{Card template}}.
See Help:Style guide/Card for how to edit this kind of article.
Edit this article
Earth Shock
767 • EX1_245
Regular 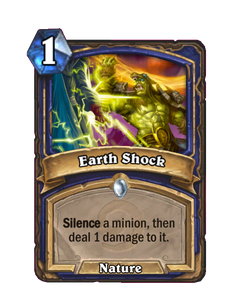 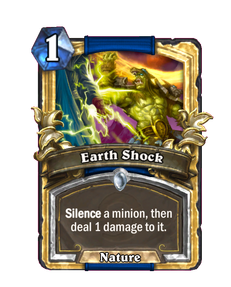 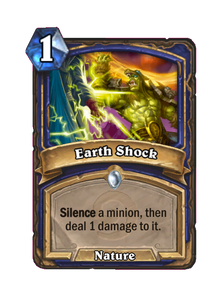 Earth Shock is a common shaman spell card, inducted into the Legacy set, formerly from the Classic set. 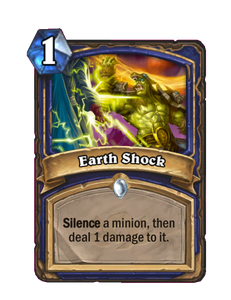 The order of Earth Shock's effects is significant: minions will be silenced, removing all card text and enchantments, and then suffer 1 damage. With its low cost, it is a cheap solution to an enemy minion which has a strong effect or was buffed by many spells.

Earth Shock is great for defeating minions with Divine Shield such as Scarlet Crusader, 1 health minions which are currently buffed to higher health values such as Twilight Drake or Natalie Seline, and minions such as Harvest Golem without triggering their Deathrattles. Even if the 1 damage is not enough to kill the minion, strategically using Earth Shock on an opposing minion with Taunt or a powerful ability can swing the game in your favor.

Notice that using Earth Shock on a friendly minion with Spell Damage will cause the spell's Silence to remove the minion's Spell Damage before Earth Shock can deal damage, with the result that the Earth Shock will deal less damage than the amount stated on the card. For example, using Earth Shock on a lone 2/2 Kobold Geomancer will not destroy the minion, but result in a damaged 2/1. This may be relevant when trying to maximise damage dealt with minions giving positional Attack buffs, such as Dire Wolf Alpha.

Earth Shock was a shaman spell with a 6 second cooldown that interrupted spells, and silenced anyone interrupted this way. It was changed in 3.2, and no longer interrupts or applies silence.