This article is using {{Card template}}.
See Help:Style guide/Card for how to edit this kind of article.
Edit this article
Eaglehorn Bow
1662 • EX1_536
Regular 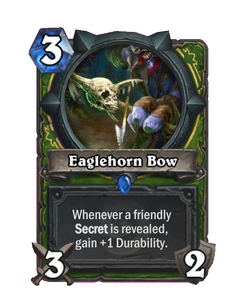 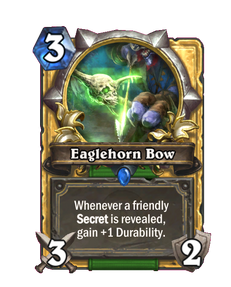 First Lesson: Put the pointy end in the other guy. 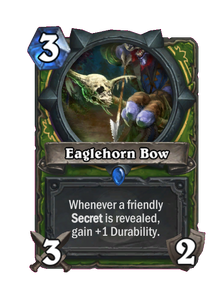 Eaglehorn Bow is a rare hunter weapon card, inducted into the Legacy set, formerly from the Classic set. 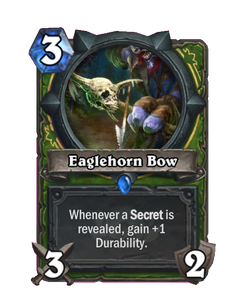 The Eaglehorn Bow is an excellent card, especially for decks that heavily specialize in Secrets. The increased Durability this card receives whenever a friendly Secret is revealed helps ensure you will have a weapon available to harass your enemy with. However, its utility and strong stats mean a single copy is often included even in hunter decks without Secrets.

Hunters commonly use the first point of this weapon's Durability to attack a minion or even the enemy hero, before then waiting to gain additional Durability from Secret reveals before using the bow again. However, the hunter may consume the entirely in order to attack a critical minion or push for lethal, or simply because they have another weapon in their hand, or have already used all of their Secrets.

There is no precise match for this weapon in World of Warcraft. The closest match is the Eaglehorn Long Bow. The bow is depicted as being wielded by a troll, but this is likely unrelated.