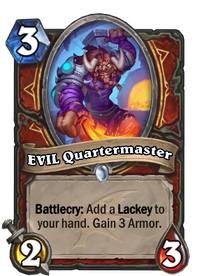 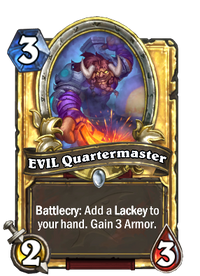 Battlecry: Add a Lackey to your hand. Gain 3 Armor.

He trained for a whole year to become quarter-master. Three more, and he'll be a full-master.

EVIL Quartermaster is a common warrior minion card, from the Descent of Dragons set.

EVIL Quartermaster can be obtained through Descent of Dragons card packs, or through crafting.

EVIL Quartermaster generates one of the following cards at random.

A simple, flexible card. EVIL Quartermaster can be considered a midrange equivalent to Shield Block, generating a small amount of armor and adding a card to your hand. Unlike Shield Block, the card is much faster and more aggressive thanks to the 2/3 body and guaranteed cheap draw. However, it doesn't cycle through the deck and only ever gives a fairly weak card.

On turn 4, EVIL Quartermaster can be played alongside Titanic Lackey, Witchy Lackey, or Goblin Lackey (with a minion to Rush into), making instant use of the card's body. The other Lackeys are decent to fill the curve as well.

Summon
This will break your fall. 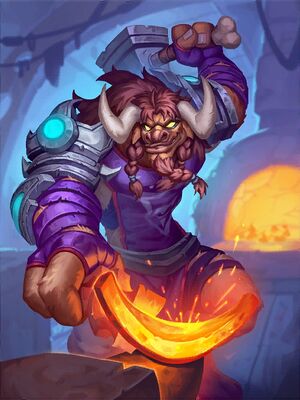