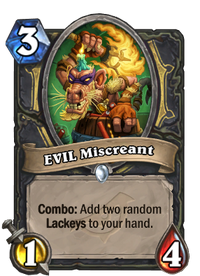 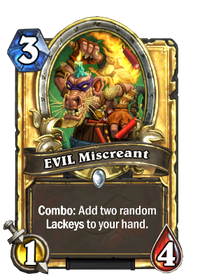 Because there are no G.O.O.D. Miscreants.

For the boss card in Book of Heroes, see EVIL Miscreant (boss).

EVIL Miscreant is a common rogue minion card, from the Rise of Shadows set.

EVIL Miscreant can be obtained through Rise of Shadows card packs, or through crafting.

This card can work well in a Combo-based Rogue deck which doesn't necessarily rely solely on cheap spells. The two Lackeys added to your hand, in addition to being powerful for their cost, can fuel further Combos.

EVIL Miscreant itself, while it has a poor statline for its cost, does synergize with the Lackeys it generates. Witchy Lackey can transform it into a viable 4-mana minion, Titanic Lackey can make it a sizable Taunt, and Goblin Lackey lets it deal 2 damage to a minion or boost it to a slightly more threatening 2/4. The high health makes it hard for your opponent to remove, usually guaranteeing the body will stick around.

Commentary: EVIL Miscreant is meant to be a value-generating card that creates future swing turns, but having 5 Health on this minion means Rogue players sacrifice very little to set up those turns. We expect that EVIL Miscreant will continue to be a great option for Rogue decks, just at a power level that is more in line with other available cards.