This article is using {{Card template}}.
See Help:Style guide/Card for how to edit this kind of article.
Edit this article
EVIL Genius
52872 • DAL_606
Regular 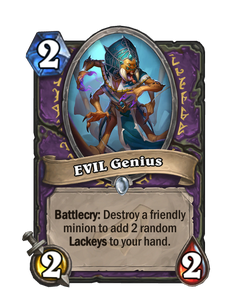 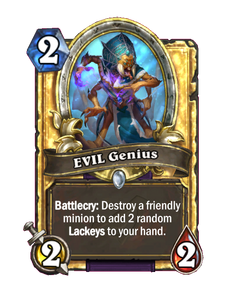 You do not want to be on the business end of this intellect! 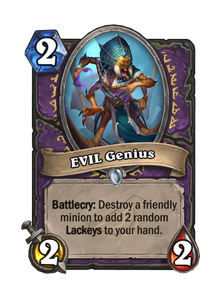 EVIL Genius is a common warlock minion card, from the Rise of Shadows set.

EVIL Genius effectively draws two cards and has decent stats for its cost, but this comes at the cost of having to sacrifice a friendly minion. This drawback can however be exploited by activating a beneficial Deathrattle effect, such as Scarab Egg, or by removing a minion with a detrimental effect, such as one that has had Blessing of Wisdom cast on it.