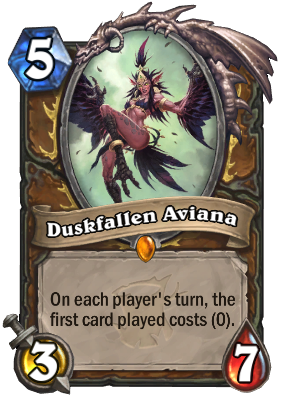 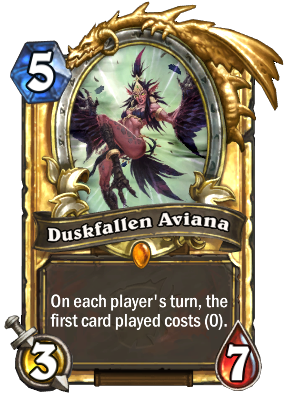 Someone called her "Tweety". She didn't take it well.

Duskfallen Aviana is a legendary druid minion card, from the The Witchwood set.

Duskfallen Aviana can be obtained through The Witchwood card packs, or through crafting.

Due to her effect impacting both players, she benefits the opposing player first. This makes her an extremely high liability in most matchups, as allowing your opponent to play a free 7+ spell or minion usually means you won’t have a chance to take advantage of her ability yourself.

Therefore, optimal play with her would focus on putting her in a control deck, and then placing her on the board against an aggro deck as early as possible. However, even in best case scenarios, she will still be an extremely high-risk card.

One way to use Duskfallen Aviana is to cheat her out without playing a card, such as with Alarm-o-bot or Sneed's Old Shredder. However, this is massively inconsistent. The only reliable method of using Duskfallen Aviana is to use Maiev Shadowsong to make her Dormant, although even then this combo costs 9 mana and is far less practical than most other combo enablers.

Based on the name, Duskfallen Aviana seemingly represents a version of the Wild God Aviana that has fallen under the sway of the corruption within the Witchwood. As such, this version of Aviana is unique to Hearthstone.