This article is using {{Card template}}.
See Help:Style guide/Card for how to edit this kind of article.
Edit this article
Duskbreaker
45899 • LOOT_410
Regular 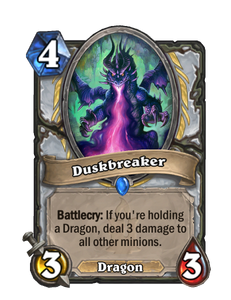 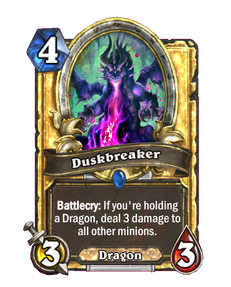 Dimensions: Full • 330 x 410px
Battlecry: If you're holding a Dragon, deal 3 damage to all other minions.
Flavor text

Waking up at the break of dusk is just not as impressive. 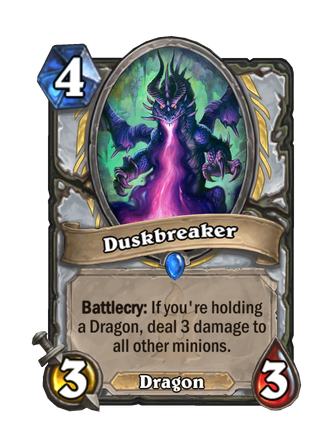 Duskbreaker is a rare priest minion card, from the Kobolds and Catacombs set.

Hellfire, Duskbreaker essentially offers a free 3/3 body, as long as its condition is fulfilled. This makes it a very strong card that should always be included in all priest decks with dragon synergies.

Duskbreaker appears to be a member of the twilight dragonflight, similar to

The twilight dragonflight is a dragonflight created by the results of magical experiments carried out by Sintharia upon dragon eggs. Using ancient dragon artifacts and the powers of the nether dragons, Sintharia created a new breed of dragons that feed vampirically on all forms of mystical energy. The first encounter of these dragons with the outside world was by Krasus, Kalec, and the draenei priestess Iridi. Iridi thought of their appearance not as shadow, but more akin to the day turning to night, like twilight as experienced on Azeroth. She thus dubbed them twilight dragons.

While Sintharia's experiments resulted in very unstable twilight drakes, and

Nefarian's experiments resulted in infertile or deformed chromatic dragons, their efforts paved the way for

Deathwing to perfect the process of breeding and artificially aging twilight dragons. These draconic aberrations were first seen in-game in Wrath of the Lich King, and became major antagonists in Cataclysm. The twilight dragonflight is now nearly extinct, most being killed in the war against Deathwing.