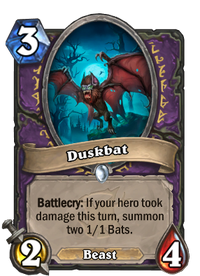 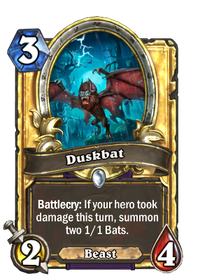 Happily married with two kids. It was love at first bite.

Duskbat is a common warlock minion card, from the The Witchwood set.

Duskbat can be obtained through The Witchwood card packs, or through crafting. 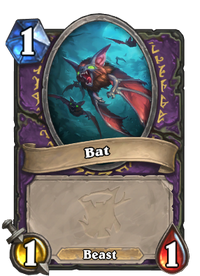 A good choice for a Zoolock-style deck looking to flood the board, especially after a mid-game board clear to retain tempo. Cards that costs your health such as Life Tap, Flame Imp, Kobold Librarian , Vulgar Homunculus , Neferset Thrasher, and Wrathguard are synergistic ways to activate the Duskbat's effect.

Duskbats are a weak, unaggressive red bat found outside Deathknell. Larger species can be found throughout Tirisfal Glades. They are sometimes hunted by the Forsaken of the town for their wings, which are used to make armor.

Duskbats aren't previously known to live in Gilneas, but as Tirisfal and Gilneas are located quite close to one another, some of the bats may have migrated to Gilneas at some point.