This article is using {{Card template}}.
See Help:Style guide/Card for how to edit this kind of article.
Edit this article
Duplicate
1801 • FP1_018
Regular 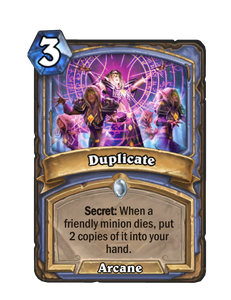 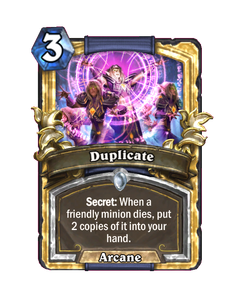 Dimensions: Full • 330 x 410px
Secret: When a friendly minion dies, put 2 copies of it into your hand.
Flavor text

The one time when duping cards won't get your account banned! 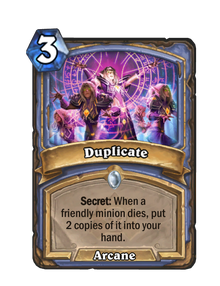 Duplicate is a common mage spell card, from the Naxxramas set.

Like other mage secrets, Duplicate has game-changing potential in its powerful effect. While Duplicating a low cost minion does at least provide you with options to play cards every turn, having extra copies of a mid-range or high-end minion can win you the game in itself. The ideal Duplicate would be to copy a high-value minion, whether for its stats or specific abilities. Duplicating an Antique Healbot can be highly effective for healing, while Duplicating an Archmage Antonidas is effective in countering the opponent's attempts to remove this key minion from the board. Note that Duplicate can allow the player exceed the normal deck limit of 2 of each card, and to gain multiple copies of legendary minions, normally limited to 1 copy per deck.

Avoid placing undesirable Duplicate targets on the board while the Secret is up. An extreme method is to not place any other minions. More experienced opponents may be able to guess your Secret, however.

Duplicate is vulnerable to transforms; like other on-death triggers, Duplicate will not activate from a transform, and like other copy effects, Duplicate will copy the transformed minion, not the original. For example, an Archmage Antonidas played with Duplicate that is then Hexed and killed, will only result in two Frogs in hand.

Duplicate can be used instead of return effects to re-play minions with useful Battlecries. This includes opponent's minions that have been copied or taken control of, which may have Battlecries not normally available to mages.