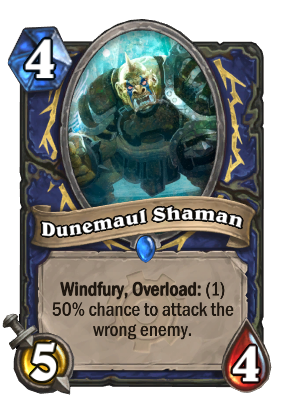 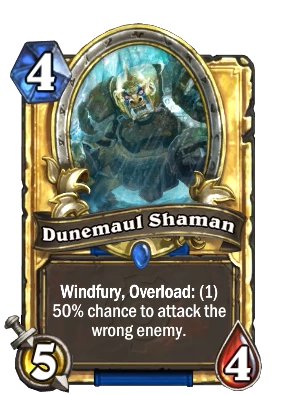 He just closes his eyes and goes for it. Raarararrrarar!

Dunemaul Shaman is a rare shaman minion card, from the Goblins vs Gnomes set.

Dunemaul Shaman can be obtained through Goblins vs Gnomes card packs, or through crafting.

Probability of hitting the right target;[]

With only the enemy hero as a hostile target, this minion has a 100% chance to hit them, effectively negating its triggered effect.

Dunemaul is a dangerous direct attacker, capable of dealing 10 damage each turn by itself. Back it up with removal spells like Lightning Storm and with luck it can end the game in short order. However, the Forgetful effect and the Overload can make the next turn difficult for the shaman if the opponent's board is filled with minions that can destroy the Dunemaul Shaman.

This can be useful for removing protected minions, or even for dealing lethal damage to the opponent themselves. For example, with only 1 Taunt minion on the field, attacking the Taunt using the Shaman will have a 50% chance of bypassing the Taunt and striking the enemy hero. In close games this chance at extra damage can allow players to close the gap.

Because of this possibility, when seeking to prevent an opponent with card such as Dunemaul Shaman from hitting your hero while behind a taunt, it is effective to summon as many minions onto the field as possible. Each acts to decrease the likelihood of an attack reaching your hero should the minion miss its intended target.

The Dunemaul clan is a large clan of nomadic ogres who have taken over a large area of Tanaris and formed a compound to the south. The leader of this clan was Gor'marok the Ravager, but was replaced by Sandscraper at some point.

Following the Cataclysm the Dunemaul clan was brought into the Horde by Megs Dreadshredder and the Dunemaul "Emissary", who are stationed at the Dunemaul Recruitment Camp, through means of force and treats.