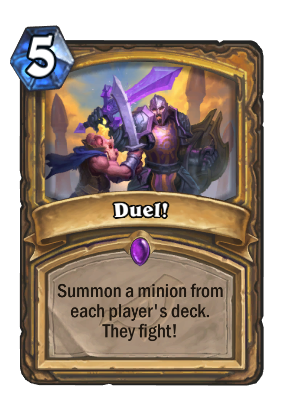 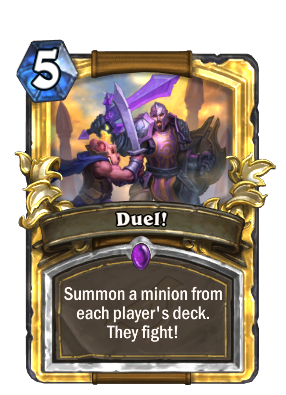 Summon a minion from each player's deck. They fight!
Flavor text

If you don't fight to the death, it's Duel Yielding.

Duel! is an epic paladin spell card, from the Rise of Shadows set.

Duel! can be obtained through Rise of Shadows card packs, or through crafting.

Duel! can be used as a disruption tool to pull an important minion out of your opponent's deck, or as a combo-enabler for yourself. Always be sure you have extra damage or hard removal in case your opponent summons a larger minion than you do. Note that this can potentially cause card disadvantage as you spend a card for minion combat if they trade evenly, but running deathrattle minions such as Plagued Protodrake and Scrapyard Colossus mitigates this risk.