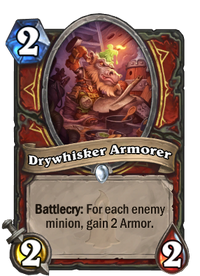 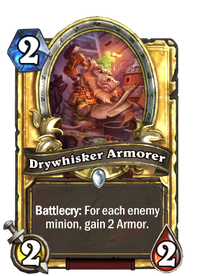 Kobolds use anything for armor: Pots, pans, garbage cans... even other kobolds.

Drywhisker Armorer is a common warrior minion card, from the Kobolds and Catacombs set.

Drywhisker Armorer can be obtained through Kobolds & Catacombs card packs, or through crafting.

Drywhisker Armorer is an inexpensive minion for a Control Warrior deck that can provide longevity against aggressive strategies, as well as synergizing with cards such as Shield Slam. It can be used before a Brawl to provide a decent burst heal alongside the board clear, with the potential of having your own minion survive. It's 2/2 stats are not extraordinary, and as such it's not an effective card to play on curve in most matchups, although when used effectively it can help contest the board and weaken your opponent's minions.

This card can be combined with Cornered Sentry for an easy 6 armor. This is especially effective if it's followed by a Whirlwind or similar effect, clearing the raptors away.

The Drywhiskers are a group of kobolds found in the Arathi Highlands.

They're allied with the giants who trapped Myzrael deep beneath the Arathi Highlands. They have Iridescent Shards, shards like Shards of Myzrael, deep within the cave in their Drywhisker Gorge.