Druid of the Plains

From Hearthstone Wiki
Jump to: navigation, search
Druid of the Plains
Regular 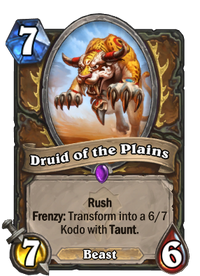 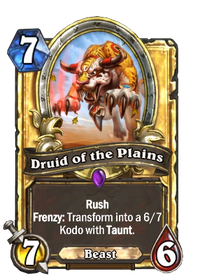 Rush
Frenzy: Transform into a 6/7 Kodo with Taunt.

Not to be confused with the aeronautically advanced Druid of the Planes.

Druid of the Plains is an epic druid minion card, from the Forged in the Barrens set. 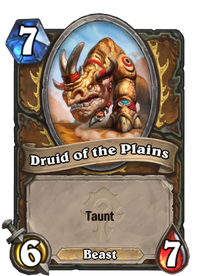 Superficially comparable to Coilfang Warlord in Demon Hunter, Druid of the Plains can act both as a removal card and a solid Taunt body to protect your hero. Remember that this card must survive attacking its target in order to transform, however, as Frenzy doesn't trigger if the minion dies. Unfortunately, any buffs you give to this minion's first form (such as those provided by Shan'do Wildclaw and Embiggen) won't carry over to its second.

As a high-statted Beast in both forms, Druid of the Plains naturally pairs well with Menagerie Warden and Shan'do Wildclaw, who can both create extra copies of it. It can be a strong minion to revive with N'Zoth, God of the Deep, but note that N'Zoth can only summon the Taunt form if the transform effect triggered earlier.