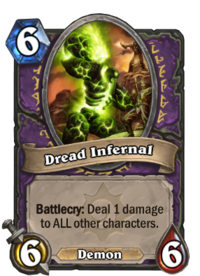 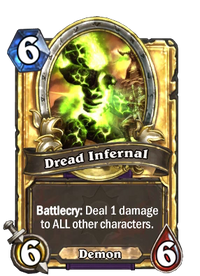 Battlecry: Deal 1 damage to ALL other characters.
Flavor text

Dread Infernal is a warlock minion card, inducted into the Legacy set, formerly from the Basic set. 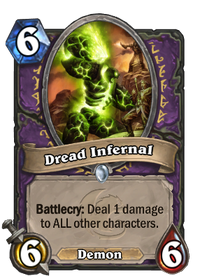 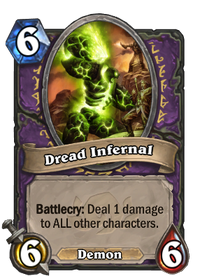 Two copies of regular and golden Dread Infernal are automatically given after the player completes the Ranked's New player experience system, unlocking Wild and Classic format.

Dread Infernal (Core) is uncraftable and cannot be crafted or disenchanted.

As a 6 mana 6/6 minion, the Dread Infernal provides the Warlock with a little bit of area of effect (AoE) damage for some board clearing potential that can kill off low-health minions, such as ones hiding being Taunt. Since this damage affects minions on both sides of the field, it's best played with the opponent has more minions on their side of the board.

Another use is to combo the AoE damage with minions with Enrage or on-damaged effects such as Acolyte of Pain to activate their effects while keeping their health up as high as possible.

It's also a demon minion, allowing for demon synergy effects, and its high base stats alone makes it a good candidate for revival with Bloodreaver Gul'dan.

The Dread Infernal resembles the Infernal from World of Warcraft. WoW warlocks can also summon an Infernal to temporarily fight under their command.

Infernals are mindless giants of flame and fury and can be summoned by warlocks and the nathrezim. They are not truly demons, apparently more similar to constructs.

Crafted by the mo'arg and gan'arg, infernals fall to earth as green, molten meteorites from the Twisting Nether. They exist only to destroy every living thing in their path. Though their lifespans are limited, the mighty infernals have been known to destroy entire cities before their energies dissipated back into the Great Dark Beyond. A large concentration of infernals can be found in Shadowmoon Valley. There are the ever present infernals attacking Alliance and Horde towns in the region; they appear to be stockpiled at Legion Hold and launched by shivarra. The Deathforge provides details on how this variety is made. Infernals are produced by a green fire elemental called an "infernal soul", which is put into a collection of fel stone by mo'arg and gan'arg engineers, which then creates a very weak infernal. They can also be stored in their comet forms.

Most dreadlords can summon an Infernal with the ultimate ability inferno. Tichondrius has been seen to summon four, while Anetheron and Balnazzar can summon two at once. Archimonde, on the other hand, is known to summon massive amounts of infernals and other demons at the same time.

Infernal's are known to be extremely unintelligent, and can barely take orders from their demon commanders as it is. They are able to understand Eredun, but are mute except for the occasional roar or grunt. There are also abyssals, a similar construct.