This article is using {{Card template}}.
See Help:Style guide/Card for how to edit this kind of article.
Edit this article
Dread Corsair
878 • NEW1_022
Regular 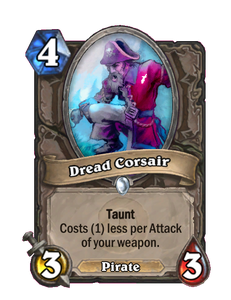 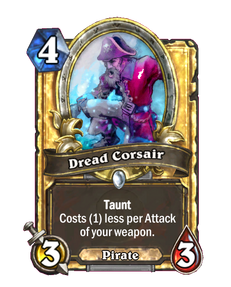 "Yarrrr" is a pirate word that means "Greetings, milord." 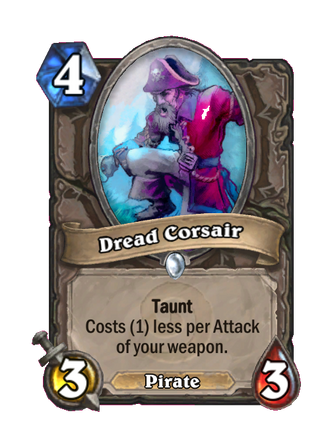 Dread Corsair is a common neutral minion card, inducted into the Legacy set, formerly from the Classic set. 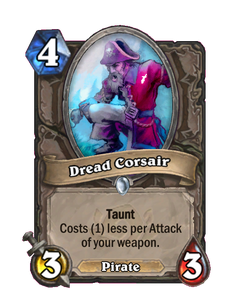 Dread Corsair's effect works well in any deck that has a lot of weapons. He is particularly good for a rogue deck, as the rogue's hero power

Dagger Mastery can keep the rogue almost constantly armed. However, note that since the basic cost of the card is too high for its value, you will need a weapon in order to make this card cost-efficient. With no weapon, this is an expensive minion; with a 1 Attack weapon such as

Wicked Knife, this card is reasonably priced, effectively a Pirate

Ironfur Grizzly; while with 2 Attack or more, it becomes a very cheap card. Aside from its Pirate synergy, this card is therefore only preferable over Ironfur Grizzly with a weapon with at least 2 Attack.

Aside from its ability, Dread Corsair's Pirate type allows it to benefit from Pirate-synergy cards like

The Dread Corsairs are the pirates under Dread Captain DeMeza, a seasonal character who appears in Booty Bay each year as part of the Pirates' Day celebration in World of Warcraft. Interacting with her grants players the Dread Corsair buff, temporarily changing their appearance to resemble one of her pirate crew.

"Ye've got some stones comin' up here, lad/lass. It's Pirate's Day, ye know... and 'til the sun rises on the morrow, Booty Bay is MINE. So! What do ye say? Raise a drink ta me and me crew, and join the celebration?"