This article is using {{Card template}}.
See Help:Style guide/Card for how to edit this kind of article.
Edit this article
Drakonid Operative
40378 • CFM_605
Regular 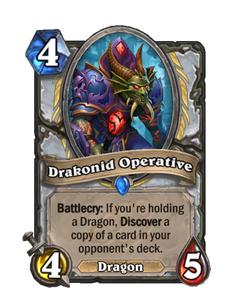 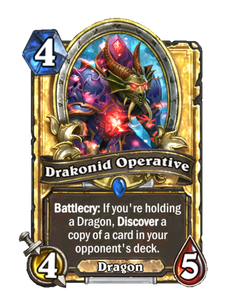 Dimensions: Full • 330 x 410px
Battlecry: If you're holding a Dragon, Discover a copy of a card in your opponent's deck.
Flavor text

His job is to spy on the Goons and the Jade Lotus, but he's OBVIOUSLY a dragon so it's pretty hard work. 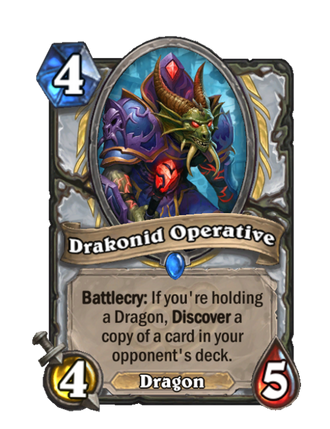 Drakonid Operative is a rare priest minion card, from the Mean Streets of Gadgetzan set.

This minion's Battlecry provides strategic insight into the opponent's deck by revealing three cards left in their deck. This not only informs the player of the opponent's deck type, but can confirm which cards they don't currently have in their hand. It also provides a form of card draw, and even gives the player the option to draw the most useful card of three, similar to how

Tracking functions. On top of that, Drakonid Operative has a very strong stat line, and provides Dragon synergy.

This card is an incredibly strong choice for Dragon Priest and can fit into Dragon-heavy Reno Priest lists.

The Drakonid Operative, a drakonid spy seemingly hailing from the green dragonflight, was hired by

Kazakus to keep tabs on his rivals. The Operative's ability keeps in line with this theme, as even the two cards the player does not pick still gives them information about their opponent's deck.[3]