This article is using {{Card template}}.
See Help:Style guide/Card for how to edit this kind of article.
Edit this article
Drakkari Defender
42750 • ICC_081
Regular 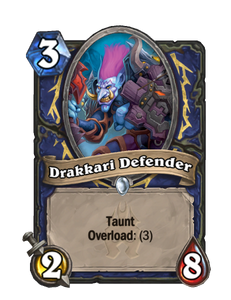 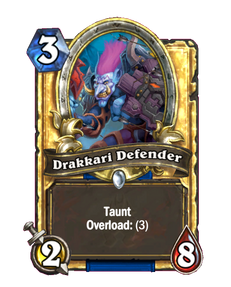 Sometimes, the best defense is an offensive troll. 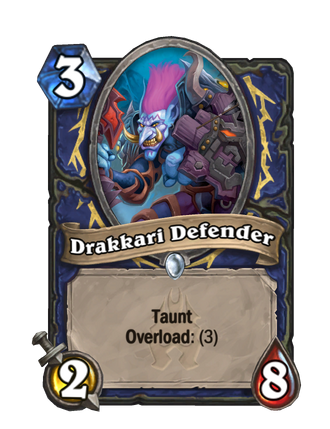 Drakkari Defender is a common shaman minion card, from the Knights of the Frozen Throne set.

Drakkari Defender has very high stats for a card that can be played at 3 Mana, but with an Overload cost of 3, it massively hinders your next turn. Its high health on curve means that is can be very effective at slowing down some aggressive decks. It can also be held and played on a later turn, where the Overload effect is less detrimental, to protect valuable minions such as

In Standard, Drakkari Defender lacks synergy to make the most of it's downside, however, in Wild, it has strong synergy with

Tunnel Trogg, as it both buffs it and protects it from direct attacks. Its hefty Overload cost also helps with upgrading a Sapphire Spellstone.

In Arena, Drakkari Defender can be played to protect valuable minions, or to help defend important minions from trade when setting up lethal. It is weak in the early game, however, as the overload is very restrictive to your ability to play minions on curve. It should be considered as a 6-drop when drafting.

The Drakkari tribe is a tribe of ice trolls that founded the nation of Zul'Drak (also called the Drakkari Empire) in eastern Northrend, with the city of Gundrak as their capital. They seem to be a hardy people, persisting through hostilities from the empire of Azjol-Nerub and now the Scourge.