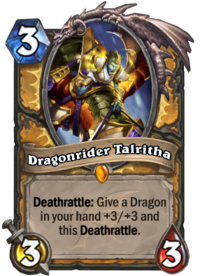 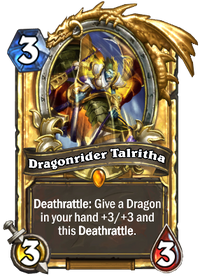 Deathrattle: Give a Dragon in your hand +3/+3 and this Deathrattle.
Flavor text

You can't just run away from your problems. Unless you have another dragon to jump to.

For her other appearances, see Dragonrider Talritha (disambiguation)

Dragonrider Talritha is a legendary paladin minion card, from the Descent of Dragons set.

Dragonrider Talritha can be obtained through Descent of Dragons card packs, or through crafting.

Dragonrider Talritha is a solid, slow card that provides a constant sizable buff so long as you are able to keep a dragon in your hand.

Talritha can be used with Emperor Wraps, provided by Making Mummies, to create copies of dragons that have Talritha's Deathrattle. This allows the Paladin to create endlessly huge dragons, so long as they have at least one dragon in their hand whenever the dragon on the field dies. Good ways to keep dragon numbers up is to copy Bronze Heralds.

Another use is to buff her with a Gift of Luminance, creating another +3/+3. And when you get 2 buffs at the same dragon, you can copy him, giving you a total of +12+12 hand buffs, and this effect can be greatly improved by combining her with a Val'anyr, providing an immense hand buff with a infinite weapon. Then, you can use your cards carefully, and converging all buffs into one powerful dragon like Nozari or Nozdormu the Timeless/Nozdormu.

Another way to duplicate her deathrattle is through the resurrect effects of Redemption or Rally!, although both can target other minions if you are not careful : respectively if Talritha isn't alone on the board, or if you had other 3 mana minions die during the game.

Like a lot of value Deathrattles, Talritha is vulnerable to silences, especially cards that mass silence such as Mass Dispel.

Dragonrider Talritha is original to Hearthstone.