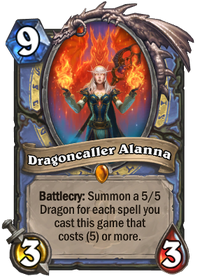 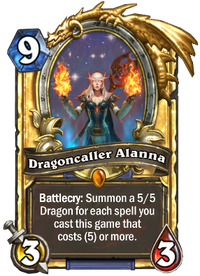 Battlecry: Summon a 5/5 Dragon for each spell you cast this game that costs (5) or more.
Flavor text

Her secret is using a gentle voice and carrying a baggie of hotdogs.

Dragoncaller Alanna is a legendary mage minion card, from the Kobolds and Catacombs set.

Dragoncaller Alanna can be obtained through Kobolds & Catacombs card packs, or through crafting. 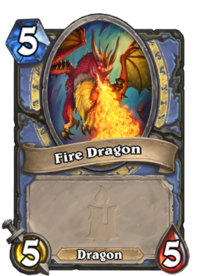 Dragoncaller Alanna is best used in a deck focused around high-cost spells. Medivh, the Guardian, Arcane Artificer, Arcane Tyrant, Spiteful Summoner, Dragon's Fury and Raven Familiar all synergize with such a deck, as they have more potential in a deck filled with high-cost spells. Bright-Eyed Scout can reduce the cost of high-cost spells you draw while still allowing them to qualify for Alanna's effect. As the minions summoned are Dragons, they gain boosts from Zoobot and Menagerie Magician, and are immune to Dragonfire Potion, making it harder for an enemy Priest to clear your full board.

Dragoncaller Alanna is unique to Hearthstone. She is an elven fire mage exploring the catacombs in search of powerful spells and working alongside Marin the Fox, Kathrena Winterwisp, and Master Oakheart. She is proud, aloof, and extremely powerful, but even though she'd never admit it, she loves her team[1] (even Kathrena, who is her "complete opposite" and tends to drive her a little crazy).[2]