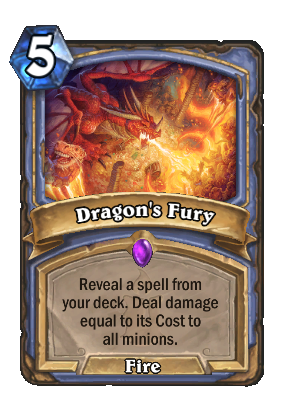 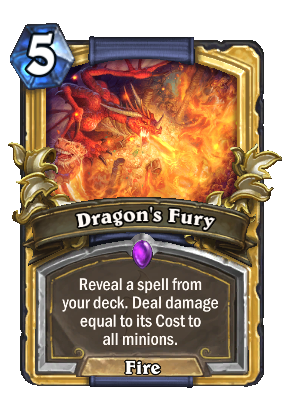 Reveal a spell from your deck. Deal damage equal to its Cost to all minions.
Flavor text

Dragon's Fury is an epic mage spell card, from the Kobolds and Catacombs set.

Dragon's Fury can be obtained through Kobolds & Catacombs card packs, or through crafting.

Dragon's Fury is a key card of Big Spell Mage and one of its most powerful board clear options. In a deck with only high-cost spells, it can easily destroy entire boards of medium to large minions and comes online two turns faster than Flamestrike, letting the Mage survive easily into the late game. The only downside of this card is that it also damages your own minions, which is usually negligible in control decks.