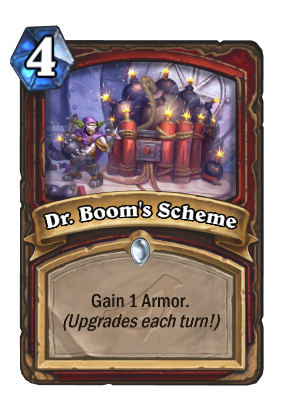 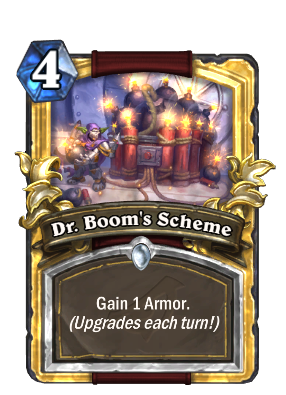 Dr. Boom's Scheme is a common warrior spell card, from the Rise of Shadows set.

Dr. Boom's Scheme can be obtained through Rise of Shadows card packs, or through crafting.

Incredibly inefficient for its cost and extremely slow to ramp up in value, Dr. Boom's Scheme is almost entirely overshadowed by cards like Shield Block and Iron Hide, which can generate decent amounts of armor for their cost without having to sit in your hand for numerous turns. Even Armor Up! grants more armor per mana if this card has been in your hand for less than 3 turns. In extreme fatigue situations, a copy of this card that has been in your hand since the early game can grant enough armor to outlast the opponent, although such situations are too rare to justify giving it a slot in Constructed or Arena decks.