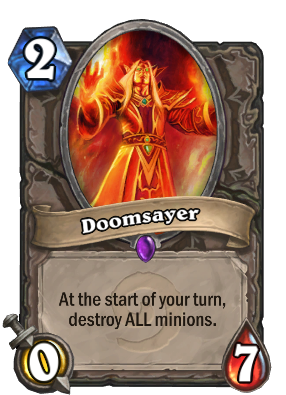 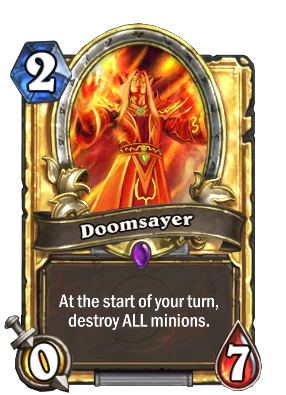 At the start of your turn, destroy ALL minions.
Flavor text

He's almost been right so many times. He was sure it was coming during the Cataclysm.

Doomsayer is an epic neutral minion card, inducted into the Legacy set, formerly from the Classic set. 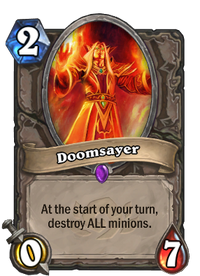 Doomsayer can be obtained through Classic card packs, or through crafting.

The Doomsayer has a low cost and a unique ability: at the start of your next turn, he will destroy ALL minions, including himself. This effect will clear the board of all minions on both sides. With 7 Health, he can take some punishment before dying, allowing him to do his job. Obviously, this card should not be included in a deck that depends on minions as the primary source of damage, but it may be able to slow down an opposing deck that depends on minions. This makes it popular in control decks, especially those with very few minions and/or which use Freeze effects, such as Freeze Mage.

Protecting Doomsayer with minions that have Taunt is possible but often undesirable, because those minions will be lost upon a successful Doomsayer activation. Instead, spells such as Frost Nova, Blizzard or Conceal can be used to keep Doomsayer alive until his ability triggers.

Doomsayer is often played even on an entirely empty board. While this offers no guaranteed value, it can stymie the opponent's plans to summon minions, in a best case scenario causing them to end their turn without being able to take any useful action. Alternatively the opponent could counter the Doomsayer using spells, Hero Powers or ideally minion Battlecries, allowing them to summon at least some minions that turn. Playing Doomsayer on an empty board offers some of the best chances of its ability being allowed to activate, alongside playing it on a full, Frozen board.

While Doomsayer is capable of destroying several enemy minions (especially if combined with a Freeze effect), it can still be an effective card when destroying a more modest number of targets. Note that while Doomsayer offers excellent card advantage, the main reason for including it in a deck is not card advantage but in fact tempo. It is therefore usually more important for the Doomsayer to thwart the opponent's progression and board development than for it to destroy a large number of minions, hence why the card is often played with an empty board.

A Silence will render Doomsayer useless unless its controller can increase its Attack, give it Taunt or return it to their hand, as a minion with 0 Attack and no abilities poses no threat and can simply be ignored. However, it is still a risk to leave a Silenced Doomsayer on the board, given the minion's high Health and the potential for the opponent to make use of it with buffs such as Inner Fire or Defender of Argus. The Doomsayer's Health makes for an excellent Taunt minion or small-minion remover.

Another easy way to get rid of Doomsayer is to use a Reversing Switch, Crazed Alchemist, or Topsy Turvy. After the Health and Attack swap, it will have 0 Health and die instantly.

If using Doomsayer, be careful when destroying an enemy Deathlord. The Deathlord's Deathrattle may fetch your Doomsayer, wiping the board in the process. Doomsayer is also a possible summon from the Deathrattle of either player's Piloted Shredder, regardless of the players' decks.

It is possible to play Doomsayer simply as a soft taunt, knowing that that it probably won't have the chance to activate. Even if it fails to activate, it may still absorb 7+ damage in attacks, a spell, a Silence, or such.

It may be desirable to play Doomsayer alongside smaller minions with impactful Deathrattles such as Loot Hoarders or Mad Scientists. This may cause your opponent to ignore the Doomsayer in order to have it freely destroy these minions (sacrificing their own in the process), while you still gain their benefits. On the other hand, if the Doomsayer is killed then you will likely still have these minions around and can gain some value out of attacking with them.

In World of Warcraft, Doomsayers were NPCs who stood in Stormwind and Orgrimmar as part of the pre-Cataclysm Elemental Unrest event. The Doomsayers would, as their name suggests, spread rumour and panic about the incoming cataclysm.

The Doomsayers returned to Azeroth with Legion, as part of the expansion's launch event, heralding the coming Legion Invasion. Although none of the Doomsayers were blood elves like the Doomsayer minion, the appearance of the NPCs seems to have been inspired by their Hearthstone counterparts, wearing the same outfit, the Magister's Regalia, depicted in this card's art. These Doomsayers stand around the major cities of Azeroth handing out pamphlets announcing the impending invasion of the Burning Legion, variously offering advice on how to survive it ("LIMITED SUPPLY: HIGH-QUALITY DEMON DISGUISES"), escape it ("FOR SALE: EZ-123 BUNKER BUILDER"), surrender to it ("EMBRACE THE LEGION"), or even defy the Legion - by killing yourself before they arrive. When spoken to, the Doomsayers say "The end is coming! Would you like a pamphlet?". Each time a new Doomsayer appears, they'll yell one of a number of possible messages to the zone, one of which is "The end is coming! Again!".

The Doomsayer appears in the alternate universe of Whispers of the Old Gods as the Validated Doomsayer. It remains unclear whether the arrival of the Old Gods was the doom originally expected by the Doomsayer, but he appears quite happy to accept it as the fulfilment of his prophecies. Judging by his transformation from a 0/7 to a 7/7, the Doomsayer's self doubt was really holding him back.

The Doomsayer also makes an appearance in the Gadgetzan Gazette, having started over as a plumbing proprietor in the newly thriving port city of Gadgetzan, stating "The city's positively aglow. I used to be a doomsayer, but Gadgetzan has really turn itself around. The tides have definitely turned in this city. I welcome new residents with open arms."