This article is using {{Card template}}.
See Help:Style guide/Card for how to edit this kind of article.
Edit this article
Doomhammer
352 • EX1_567
Regular 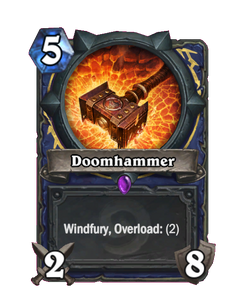 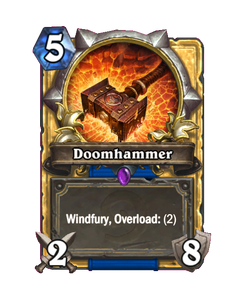 Orgrim Doomhammer gave this legendary weapon to Thrall. His name is a total coincidence. 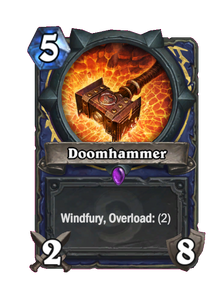 Doomhammer is an epic shaman weapon card, inducted into the Legacy set, formerly from the Classic set. 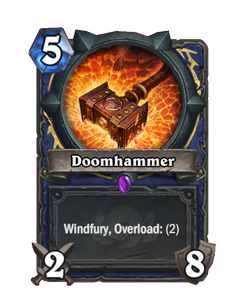 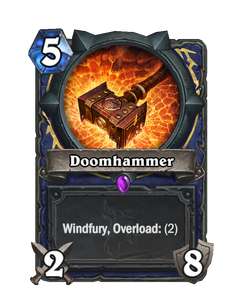 Two copies of regular Doomhammer are obtained for raising shaman to level 9.

Two copies of golden Doomhammer (Core) are obtained for winning 250 games as shaman.

Doomhammer (Core) is uncraftable and cannot be crafted or disenchanted.

With this weapon you can attack twice a turn with your hero, but bear in mind that each time your hero attacks it will use 1 Durability. This means if you attack with this weapon as often as you can, you will only be able to attack with it for four rounds, not eight. Still, from this one card you can get out up to 16 total damage, targeted in 2 damage chunks making it very card efficient.

This card is most commonly seen in aggressive Shaman decks, as the threat of 16 damage over 4 turns is essential to the Shaman's ability to close out the game. When playing an aggressive Shaman deck, it is usually desirable to play Doomhammer as early as possible. For this reason it is important that you do not Overload yourself on turn 4 if you have Doomhammer in your hand, so that Doomhammer can be played on turn 5.

Doomhammer's synergy with Rockbiter Weapon is extremely powerful, with the weapon's Windfury effectively doubling the Attack bonus, allowing your hero to deal 10 damage in a single turn, or 16 damage with two Rockbiter Weapons. Some players will try to hoard the Rockbiter Weapon and conceal it for a lethal attack to end the match. However, this is often a suboptimal line of play. As an aggressive Shaman player, it is important to play the Rockbiter Weapons to get the damage in as early as your mana allows. Otherwise, you expose yourself to the threat of Taunt minions played by your opponent, ruining your strategy and potentially costing you the game.

In mid-range or control type Shaman decks, Doomhammer serves as an important board control tool. It is important to be careful when using Doomhammer in this manner, as the damage suffered from hitting your opponent's minions can be costly for your Health.

The weapon's high Durability is also its weakness. In Wild, Harrison Jones is a popular anti-weapon tech card that finds its way into many control decks, which can easily ruin a Shaman's game plan. Minions with high Health and Taunt such as Sen'jin Shieldmasta or Druid of the Claw will likely spell defeat for the Shaman, which is why spells like Earth Shock are important for clearing the way.

Doomhammer is a legendary weapon from Draenor, homeworld of the orcs.

Despite its name, Doomhammer is a weapon of good, bringing doom to enemies and upholding the family's honor. The weapon can be traced to Telkar Doomhammer, father of Orgrim.

Young Orgrim came to admire the hammer, knowing one day it would be his own. In a meeting between Orgrim, Durotan, and prophet Velen, Orgrim told of a prophecy about the Doomhammer saying that "The last of the Doomhammer line will use it to bring first salvation and then doom to the orc people. Then it will pass into the hands of one who is not of the Blackrock clan, all will change again, and it will once again be used in the cause of justice."

As is the nature of such prophecies, the orcs did indeed fall, all due to the manipulations of Gul'dan and Kil'jaeden. Orgrim, last of the Doomhammer line, passed the weapon on to his protégé Thrall, the one who redeemed the orcish race and completed the prophecy.

Through blood the weapon shall pass, as surely as night begets day,
Until the elements cry unheard, and pride turns to unbridled rage.
The last of the line shall deliver salvation and doom upon his kind.
Honor will be undone and all will be lost, before it is found again.
A stranger will raise the hammer high, and with it justice shall reign.

All of the Doomhammer bloodline's successors bore this ominous prophecy on their great shoulders, divined long ago by the Blackrock clan's elder shaman. Yet for generations, these tidings of doom went unfulfilled. The legendary Doomhammer weapon became a standard of pride and honor, its immense black stone as indomitable as the orcs' fierce spirit.

When the heirloom passed to Orgrim Doomhammer and the mighty orcish Horde rose to power, the weapon met no equal in battle. Innumerable foes suffered its wrath, the warhammer even shattering Sir Anduin Lothar's fabled rune-etched Blade of Stormwind before crushing the human's skull.

Only too late did Orgrim realize that he was the harbinger of doom prophesied by his clan's ancestral shaman. Although he had slain the power-hungry Horde warchief Blackhand and many of the depraved warlocks who had destroyed the orcs' culture, Orgrim's people were ultimately defeated, and most of them were rounded up in human internment camps to live out their days in shame and lethargy.

The prophecy, however, had not yet run its course. So it was that Orgrim, mortally wounded while fighting to free his people from imprisonment, bestowed the Doomhammer on one who was not of his clan or bloodline: Thrall. Wielding the hammer as a symbol of hope, the young orc liberated his race and rekindled the pride and heritage that the orcs had abandoned as the bloodthirsty Horde.

The image of a wolf was later added onto the Doomhammer to denote Thrall's hereditary ties to the Frostwolf clan, but little else has changed about the weapon. Through war and peace, the hammer has remained at Thrall's side, an embodiment of his race's strength as it was in ancient times, and a symbol of doom to the enemies who would dare threaten the orcs' freedom and honor.