Doom in the Tomb

For the Tavern Brawl of the same name, see Doom in the Tomb (Tavern Brawl).

Doom in the Tomb is a Hearthstone event lasting from October 8th to October 30th, 2019.[1] Based on previous years' Hallow's End event, Doom in the Tomb loosely ties into the ongoing narrative of the Year of the Dragon and features new Tavern Brawls, legendary quests rewarding gold and card packs, and temporary event versions of 23 Wild format cards added to Standard format and given out for free.

The Wild event cards added during the event lasted beyond the event's time and were available until Hearthstone's next major content patch, which was on December 5, 2019.[2]

The official patch notes announcement can be found here.

Doom in the Tomb shares the following features with the regular Hallow's End event: 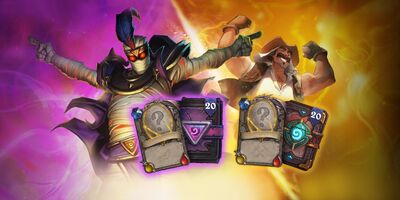 Two limited-time bundles were added with the event. Each bundle featured 20 packs and a random Legendary from their respective sets, for $19.99 USD. The Hex Bundle contained Rise of Shadows cards while the Flex Bundle contained Saviors of Uldum cards.

A Dungeon Run-style PvE Tavern Brawl in which the player must defeat eight Tombs of Terror bosses as one of the members of the League of E.V.I.L.. Completing a run in under 1 hour awards one Rastakhan's Rumble pack. Completing a run under 40 minutes awards a Golden Ancient Mysteries.

A tavern brawl with similar mechanics to the Carousel Gryphon's Merry Go Round Hero Power. Two Timeshift: Dreadsteeds are summoned for each player at the start of the game. Summoning 100 Dreadsteeds across all games awarded one Rise of Shadows card pack.

Doom in the Tomb featured several legendary quests that rewarded either a card pack from one of the current Standard card sets, or a significant amount of gold. A new quest was unlocked once a week for the duration of the event.

Treasures from the Tomb![] 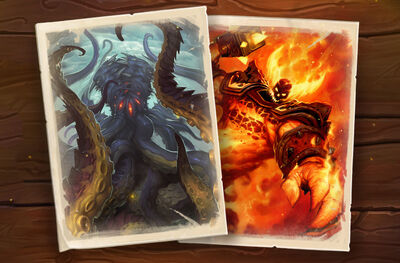 Event versions of 23 noteworthy Wild format cards were added to the game. These cards were playable in Standard format. To ensure that all players could enjoy the event, the cards were given away for free to everyone. They also could not be crafted or disenchanted. Note that only these special versions were Standard legal - even players who already owned the cards were given temporary event copies.

Unlike the rest of Doom in the Tomb, the Treasures from the Tomb cards were available until December 5th.

Trailer
Rafaam: AHAHAHAHA!
Reno: Not so fast riff-raff, the treasure is mine!
Rafaam: That's what you think, but I'll have to decline.
(lighting strikes)
Headless Horseman: Your endless prattling fills me with gloom. It's time you both met your doom in the tomb! HAHAHAHA! Now I'll unleash powers most wild! Terrors return, no longer exiled.
Rafaam: No rhymes can bring me grief. Not I, the world's greatest thief!
Reno: Onwards for glory, and things to... explore-y?
Headless Horseman: You're too late dear heroes, the Horseman is here. It's Hallow's End, and the dark night draws near!
Rafaam: This Horseman seems so medieval. I'll have to show him TRUE EVIL!
Reno: You can't win with a plan so feeble! The Explorers won't let you, you... weeble? Hmm.
Headless Horseman: The night is still young, so let us proceed! You'll be no match for my trusty death steeds! Round and round your minions will spin. Don't lose your head, and you just might win! HAHAHAHA! On Hallow's End, great powers are mine. In the Arena, two classes now combine! You'll need more than that to defeat us tonight, so pick your bundle and prepare for a fight.
Rafaam: Cast a hex!
Reno: Defeat with a flex!
Headless Horseman: If that's not enough, then play another round. Quests and rewards and challenges abound! Once the sun rises, my terrible night is done. Good luck heroes, I hope you have fun!
Rafaam: Did he call me... a HERO?!
Reno: I think he said "zero" - ho, yes!

Blog
Legends have told of dangers lurking within the Haunted Temple of Uldum and the grand ancient treasures they conceal. Of course, “treasure” was all anyone had to mention to get Reno and Rafaam on board, and now their sights are set on acquiring the temple’s powerful artifacts for their own campaigns!

It won’t be an easy task, though. While our Heroes and Villains battle to push deeper through the Haunted Temple, the Headless Horseman has resorted to a nefarious contingency and opened a sealed sarcophagus full of WILD terrors. Now it will be up to you to aid the conquests of good, or E.V.I.L, in a race to uncover the tomb’s precious secrets and escape the doom in the tomb!