This article is using {{Card template}}.
See Help:Style guide/Card for how to edit this kind of article.
Edit this article
Don Han'Cho
40703 • CFM_685
Regular 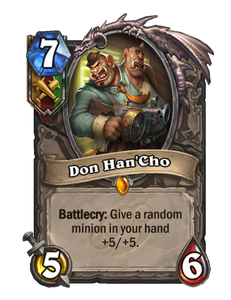 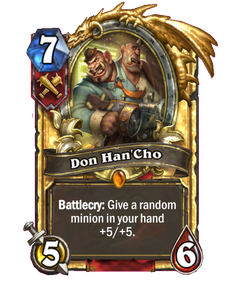 The brilliant mastermind of the Grimy Goons, Han sometimes thinks about ditching the idiot Cho, but that would just tear him apart. 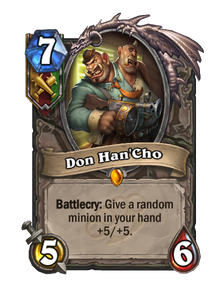 Don Han'Cho is a legendary tri-class minion card, from the Mean Streets of Gadgetzan set.

Don Han'Cho's buff is best applied to a minion that can make good use of it, usually through specific effects. Minions that provide value through Battlecries, Charge or Deathrattles are a good defence against removal effects: Dispatch Kodo deals 7 damage, Rat Pack summons a full board of Rats, and Wolfrider becomes an 8/6 Charge. Minions that grant effects based on damage dealt can also be effective, such as Alley Armorsmith. In more modern days many cards from the Core set can be improved greatly by Don Han'Cho such as Emerald Skytalon, Jungle Panther, and Ice Rager.

Summon
Hey, join the Goons. (Or meet my fist!)

Han is a criminal mastermind—a real genius—and Cho? Well, Cho isn’t the sharpest axe in the armory, but he hits like a runaway kodo. More like a stampede of runaway kodos. Maybe you’ve heard dat two-headed ogres got some serious magical chops, but not Don Han’Cho. The Don don’t need magic cuz he’s got us, da Grimy Goons. We done real good for him too, what with all the robbin’, extortin’, blackmailin’—y’know all the good crimes. Not to mention our speciality: arms smugglin’.

You might think Don Han’Cho has it all: he just bought the First Bank of Gadgetzan, he takes a cut from da loot fenced at da Gadgetzan Emporium, and he’s got a tight grip on the whole Grimestreet neighborhood. Believe me, Grimestreet is just the beginning, my friend. Don Han’Cho is preparin’ for a hostile takeover of Gadgetzan, so he’s been recruiting new Goons non-stop and stockpiling weapons like you wouldn’t believe. Now he’s got the most muscle, and arsenals stashed down every side-street and bolt-hole in dis town.

When da coin drops, you know the Grimy Goons are gonna be ready."[1]

An article on page 2 of The Gadgetzan Gazette Volume 32 #10, which discusses the re-opening of the First Bank of Gadgetzan after Han'Cho's aquiring of the bank, specifies that Cho is the left head while Han is the right head. The article claims that after cutting the ribbon, Cho said that "Dis Bank good. Plenty of dough", after which Han continued "Please pardon my associate's rough manners. I am proud to say that the First Bank of Gadgetzan will serve as a symbol of wealth and opportunity for all of Gadgetzan's citizens. If you are one of those wealth seeking opportunists, come see us; we'll beat ANY competitor."