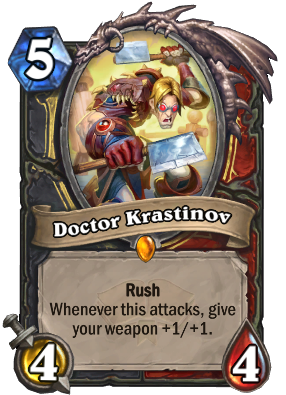 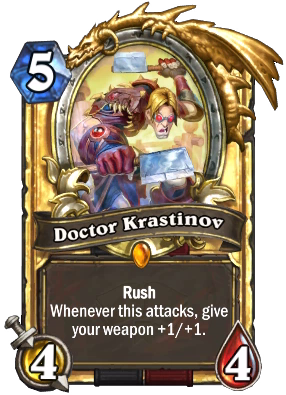 Rush
Whenever this attacks, give your weapon +1/+1.
Flavor text

He is not a medical doctor.

Doctor Krastinov is a legendary rogue/warrior minion card, from the Scholomance Academy set.

Doctor Krastinov can be obtained through Scholomance Academy card packs, through crafting, or as an Arena reward.

Doctor Krastinov is awfully similar to Captain Greenskin, essentially trading 1 Attack and the Pirate tag for Rush. Like Greenskin, he fills in the same role of giving your weapon buffs, but providing board presence with Rush, making him an easier minion to play in most cases, not to mention he could possibly buff you weapon again if your opponent can't remove him immediately. He's particularly more useful for Rogues since they lack ways to increase the Durability of their weapons, which weapons like Self-Sharpening Sword greatly benefit from.

In World of Warcraft, Doctor Theolen Krastinov is a rare elite level 91 undead human found in Butcher's Sanctum of Scholomance.

This card art depicts Doctor Krastinov as he appeared prior to Scholomance's revamp in Mists of Pandaria.

Known as "The Butcher", Krastinov was the servant of Kirtonos the Herald and the main torturer and provider of bodies and bodily parts for the Scholomance's necromancy experiments.

His first victims were recruited from among the household of Caer Darrow. Among them were servants of the Barov family, Eva and Lucien Sarkhoff. Trapped, tortured and maimed for months, they vowed vengeance on Krastinov even beyond the grave.

"The undead surrounded us, constantly tormenting us with horrifying acts of depravity. Finally, he came. He introduced himself as Doctor Theolen Krastinov. We came to know him as the butcher...We finally understood what the screams were from. The Butcher exposed us to pain that we did not know existed. He used us in countless experiments to devise a plague. The days turned to weeks. We would have died on that first day had it not been for that cruel bastard keeping us alive through magical means....We feel nothing. Our souls remain here, in limbo. We are unable to leave until our remains are found and spirits laid to rest."

Eventually Krastinov was killed for his atrocities, however, Darkmaster Gandling still saw some usefulness out of him and raised him into undeath to continue serving the Scourge. Some students trained under the doctor himself were sent to the Plaguelands.