This article is using {{Card template}}.
See Help:Style guide/Card for how to edit this kind of article.
Edit this article
Djinni of Zephyrs
2925 • LOE_053
Regular 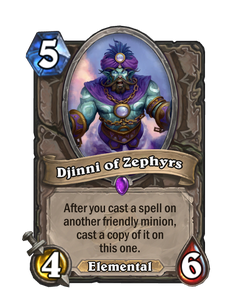 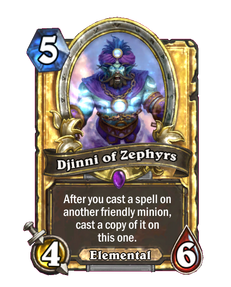 Dimensions: Full • 330 x 410px
After you cast a spell on another friendly minion, cast a copy of it on this one.
Flavor text

If you want your wish granted, don't rub him the wrong way. 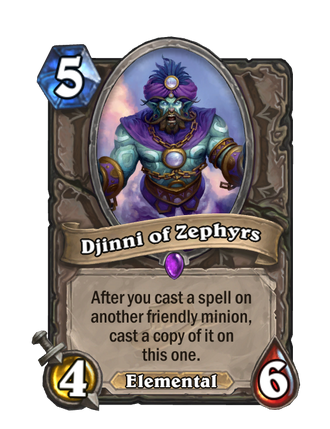 Djinni of Zephyrs is an epic neutral minion card, from the League of Explorers set.

This card effectively doubles the effect of any buff-granting card you use. This can be very strong as it gives you tempo each time you use a buff spell.

Particularly interesting interactions with this card include

Moonglade Portal. The Explorer's Hat copies onto the Djinni, meaning it gains +1/+1 and will also add an additional hat to your hand upon death. Meanwhile, when one of these Portals is played on Djinni, it will copy the Portals' summoning effect as well, which will summon an additional minion of the corresponding cost.

One noteworthy combo involving Djinni of Zephyrs involves the cards

Potion of Madness and

Shadow Madness. Using these cards on an enemy minion causes it to become friendly for the turn, and also gives it Charge which allows it to attack that turn. Since Djinni checks to see if a minion a friendly after the spell is resolved, this will give Djinni Charge as well. The combo involves playing Djinni of Zephyrs taking control of a enemy minion with one of these spells. Then, Health buffs such as

Confuse is used to convert Health to Attack. Djinni of Zephyrs will gain Charge as well as the effects of the buffs, which allows priests to deal massive burst damage.

A djinn (pronounced genie) is a type of powerful air elemental that can be found in the Skywall. Most djinn in World of Warcraft are powerful lieutenants of Al'Akir. They made their first appearance during World of Warcraft: Cataclysm.

It was the djinn that gave the tol'vir back their immortality as creatures of stone, in exchange for their allegiance to

Deathwing. The only tribe of tol'vir to accept the offer were the Neferset. When the Orsis tribe refused to serve Deathwing, Al'Akir's djinn buried the city beneath a mighty sandstorm.